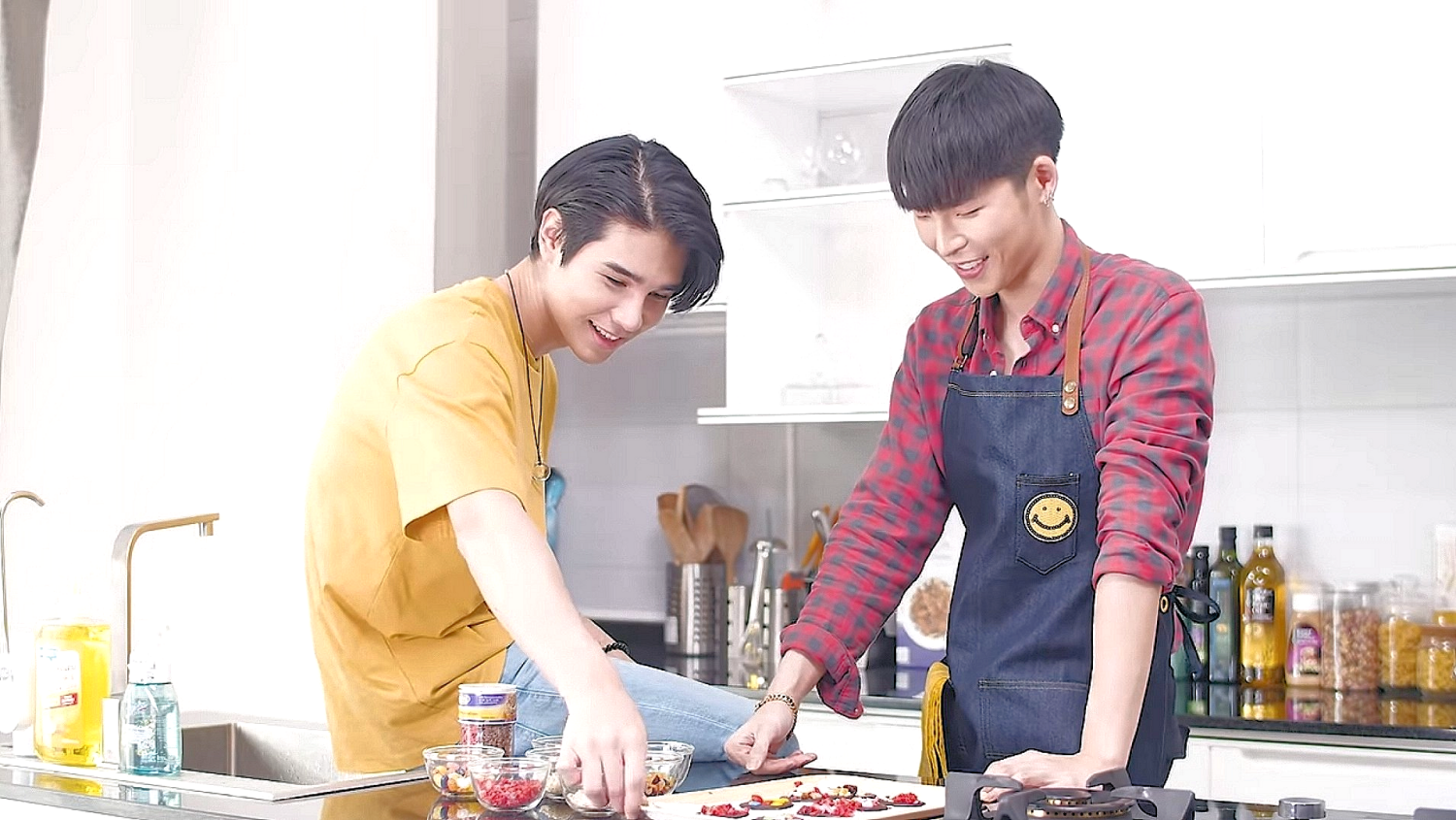 Jeff Satur and Gameplay Garnphapon had sensual chemistry in Warper TV’s mini-series He She It that set our screens on fire. However, their romance in Central Food TV’s new mini-series Ingredients is even more enviable. Ingredients is a BL themed romantic comedy that showcases the love of gourmet food, featuring our main leads Tops & Marwin.

Jeff portrays the character Marwin, a romantic balladeer while Gameplay plays his roommate, Tops, a culinary student aiming to become a chef. Let’s dig deeper into this ‘foodie’ (a person with a particular interest in food; a gourmet) drama/comedy, which always leaves me yearning for more.

Marwin is visibly upset because his concert got canceled. When Tops comes home from grocery shopping, he realizes the issue right away. And so begins the inevitable cooking class with Chef Tops!

It is a characteristic of each episode that showcases different recipes that Tops cooks to make things better for Win. There are obviously feelings involved, and you can guess that from the way Tops looks at Win – like he hung the moon. In this episode, we are treated to “Chocolate and Matcha Latte.”

I just love watching Gameplay’s character Tops work his magic in the kitchen. Cooking shows are my one of my weaknesses, and I love watching the intricate, precision processes involved. The way Tops cooks makes us realize how much he enjoys it and even more so when he is cooking for Win. With each step Tops takes, he explains the reason behind the task with every dish. We as an audience, begin to realize how much thought he has put behind the effort. In this instance, he makes Chocolate because it will make Win feel better and lower his stress, and the Matcha will boost Win’s immune system. Indeed a simple trick to draw Win’s attention away from his troubles for the day.

It’s Win’s turn to do grocery shopping, but when he comes back home, the power is out. It’s hilarious to see a grown-up man throw a tantrum like a little kid. Trust me, Win is so melodramatic on all levels, and only Tops has the patience to deal with him. This begins our next cooking class where Tops makes a “Fruit topped with Savory.” As soon as Win partakes of it, he is refreshed instantly. Top’s cooking inspires Win to write a new song, and the episode ends with some cute flirting between our adorable main leads.

Jeff Satur and Gameplay Garnphapon are the steal the show. You might wonder if it’s worth watching a show with just two main characters, no extra fuss, and a very simple theme. However, Ingredients is more than that. Drawing comparisons between their earlier pairing in He She It is inevitable because in He She It, both actors played characters that had some intriguing dark traits as well. Their roles were intense and challenging, and bordering on maniacal tendencies. Conversely, as characters Tops & Marwin here, they have nothing but light-hearted banter and sweet romance.

This show showcases the interactions between them as well as their blossoming affection. Marwin is not only a good singer but is also outspoken, and the way he makes Tops blush is interesting. Tops, on the other hand, makes cooking gourmet food look like a seemingly easy task. However, his efforts barely mask his love and affection for Marwin. I must say, a truly compatible “Gourmet Couple.”

Watch this drama if you are feeling sad or disheartened, because it will surely lift your spirits and make you fall for Tops & Marwin!