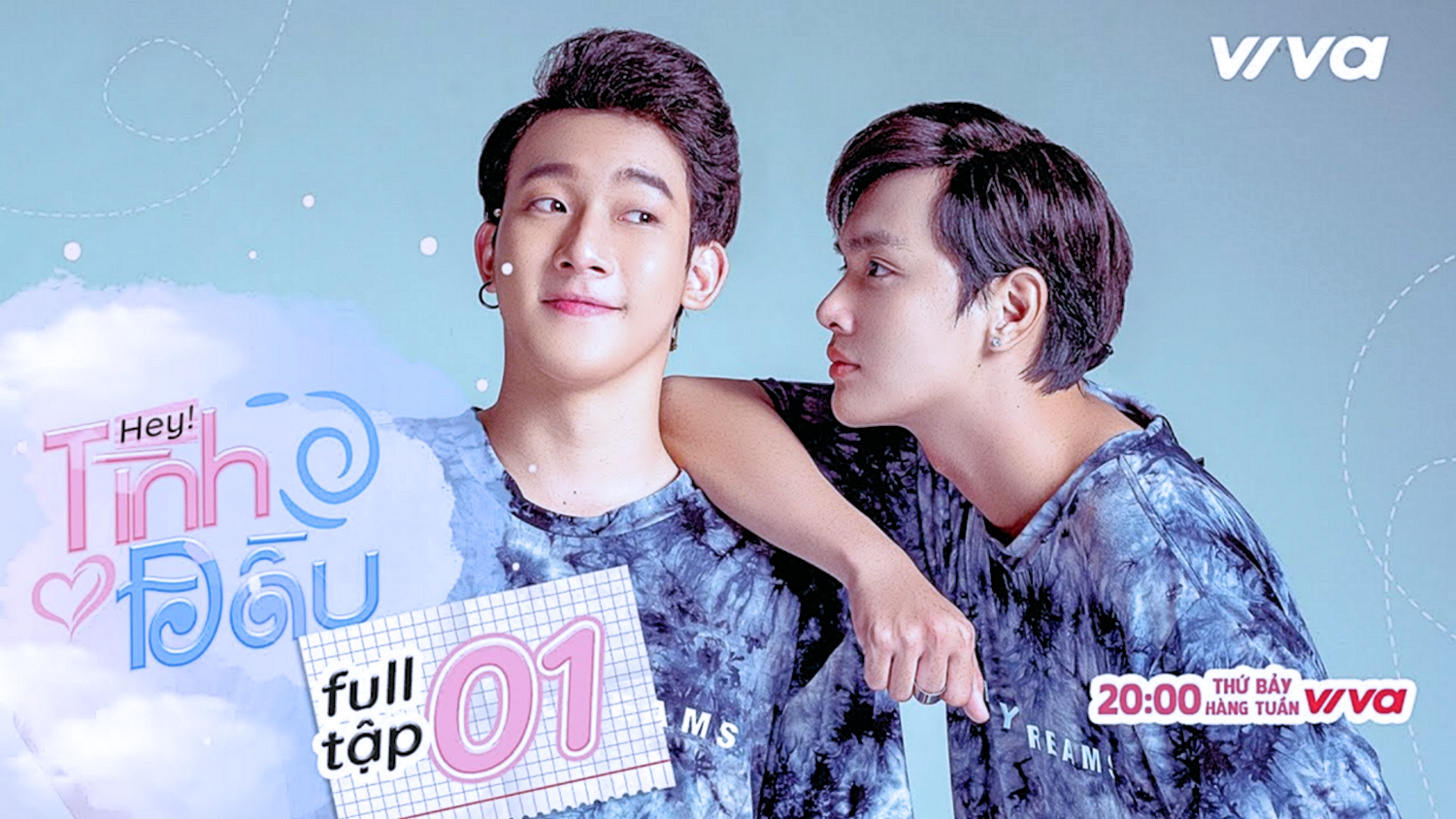 Hey, First Love (Hey Tình Đầu) is a rambunctious Vietnamese romcom mini-series featuring Trei Pharm of Tiến Bromance fame with his co-star Kaibie from popular Vietnamese drama “Comet, I Love You.” Trei Pharm’s character is named as Ey, and Kaibei’s character is Noob. Each episode shows the blossoming relationship between our adorable main leads, and it’s so relatable that it will leave you surprised and smiling!

Our lazy main lead, Noob, is sleeping in the classroom when the sunbeams seem to disturb him. Instantly Ey forms a protective shield with his book held upside down. We have a resident classmate whose sole purpose in life seems to irritate our main leads, who walks in and rebukes Ey for reading the book upside down. The scene starts off romantically and ends up funny, you can’t help laughing!

Next, we have both leads in the canteen where Ey buys a can of milk for Noob. Noob then scolds Ey for buying him milk. Ey retorts back that Noob told him he wanted milk in their late-night chat. Noob checks the chat, and indeed it is there. But he bursts out, shouting, “This is not the milk I was talking about” and then immediately gets flustered. The innuendo is clear, and yet it gives us an idea of their relationship.

In the next scene, Ey is trying hard to teach Noob about precipitation involving Silver Chloride. But Noob keeps zoning out, so Ey takes the direct approach. He puts a cap on his head and calls himself Silver Nitrate and puts another cap on Noob, calling him Sodium Chloride. He then holds Noob’s hand to explain about the catalyst and finally kisses him for a reaction. Why didn’t I have Tutors like this during my school time?

In the final scene, Ey and Noob are having drinks in a cafe. Noob asks Ey why he always drinks bitter coffee, and Ey replies, “I have you, my sweetness” will give you major feels!

Ey and Noob walk into the school compound, arguing as usual, when a cork hits Noob right in his face. He shouts at Tai and throws the cork away. Ey picks it up, though, and gives a devious smile. Next, we see their irritating classmate searching for the cork, but Ey has plucked off all the feathers, and so it’s totally useless now. This guy is seriously something; you can’t help admiring his zeal!

The next scene is even sweeter. Ey is walking with his hands full of snacks. He isn’t able to hold them for long, and some snacks fall to the floor. Noob points that out, so Ey pushes the snacks into Noob’s hands, picks him up in bridal style, and walks off with a smirk on his face. I’m totally jealous!

The next scene is a major testament to my jealous feelings. One of the classmates forces Noob to deliver her love letter to Ey. When he reads it, he thinks it’s from Noob. Noob, stewing in jealousy, points out it’s from their classmate. In his true style, Ey immediately replies, “It doesn’t matter, as long it came from you, then I know you like me, and I like you too.”

If you thought Ey had it bad, think again because Noob has it worse. Ey is tutoring him again, and this time it’s Math. He explains the formula, and Kaibei asks the reason. Ey immediately points out it’s because it’s math, so Noob draws a comparison “Hey, this is like me because my feelings for you won’t ever change.” Ey is left speechless, and I totally loved how Noob took the reins this time.

Our adorable couple is back to bickering. Noob is a real forgetful guy. He is searching for his bike keys and even goes on to search Ey. Ey asks him to check again, and Noob loses his cool. Ey pulls him close, and the key is hooked onto Kaibei’s fingers.
Getting fooled once wasn’t enough for Noob. Ey is playing table tennis with a friend when Noob walks in. He asks to join in, but Ey teases him about it. They have a match, and Ey keeps teasing him throughout the game. Again Noob loses his cool and shouts at Ey.

Noob is a lot calmer when they meet again. He offers a bottle of water to Ey for recharging. But instead, Ey pulls him closer for a passionate kiss. I just love their dynamics. They are school kids, certainly childish, but that doesn’t stop them from making mistakes or apologizing later. This show displays teenage friendship and romance in a realistic way.

Ey and Noob are at the canteen for lunch. Noob goes through the variety of foods available, picks, and rejects them all. Ey is confused and asks him directly, “What do you want to eat?” Our shy puppy teases him by picking up a banana and pointing it at Ey, “You.” Also, he is quite proud of this proclamation!

Ey and Noob are playing rock, paper, scissors. Kaibei wins twice and strikes Ey’s forehead. But he isn’t lucky the third time, and Ey wins. But instead of giving a strike on Noob’s forehead, Ey pulls him closer for a kiss. Noob is flustered, they play again, and Ey wins. Yet again, he playfully pulls Noob and goes for a longer kiss this time. Noob’s reaction is this!

Our cute couple is at the cafe again. Noob is adorably confused as to what they should next. Noob keeps throwing off suggestions and then rejects him one by one. All the time, Ey keeps nodding. At last, Noob is irritated and asks why Ey keeps nodding his head. Ey’s reply will leave you speechless “It doesn’t matter where we are going. Because You and I, we will always stick together.”

The theme for Episode 4 is “Jealousy and Mothers.” Ey walks in to find Noob flirting with their classmate. Noob is doing it on purpose. So Ey walks to the garden and digs up a snail. He places it on the book that Noob is reading. Seeing the snail, their classmate runs off. I love this possessive approach!

In the next scene, Ey is talking to someone on the phone very happily. Noob mistakes it for some random woman and snatches the phone from Ey. He screams but gets shocked to know that the person on the other end is Ey’s Mother.

Next, we are introduced to Noob’s Mom. She has come to stay with them for a few days. They are having drinks when she walks in. Ey invites her, at first she refuses, but then joins in. She has an amazing capacity as she finishes off more cans than Ey and Noob together.

The ending scene has our sweet couple making out in their bedroom. They’re about to kiss for the second time, and suddenly the toilet door opens, and Noob’s mother comes out. I’m totally surprised by her reaction as she smiles and walks out, telling them to continue. “Best Mom of the Year” goes to her. No judgment, nothing! She easily accepts her son’s choices.

My Opinion On The Drama

“Hey! First Love” is a light-hearted comedy giving us a glimpse into the daily lives of our adorable main leads. I was pleasantly surprised by Tre Pharm whose character Tai in “Tiến Bromance,” is shy and introverted. On the other hand, Ey is vivacious and romantic. Giving him company is Kaibei, who makes “Noob” quite humane. His child-like exuberance makes the character realistic and adorable.

The episodes are 10 minutes long but are divided into different parts;  each part has a different storyline. You can’t help fall for Ey’s confident demeanor or Noob’s adorable antics or flustered reactions. The mini-series is breezy and leaves you with contented smiles! Don’t go looking for logic because this show is focused on teenage kids and their high school romance, although both of our main leads don’t look like school kids at all! They have cute chemistry, which will leave you envious, and you will anticipate the next episodes. Watch it, if you are looking for some light-hearted moments to while away your time! All episodes are available on Viva Network’s YouTube Channel with English Subtitles.