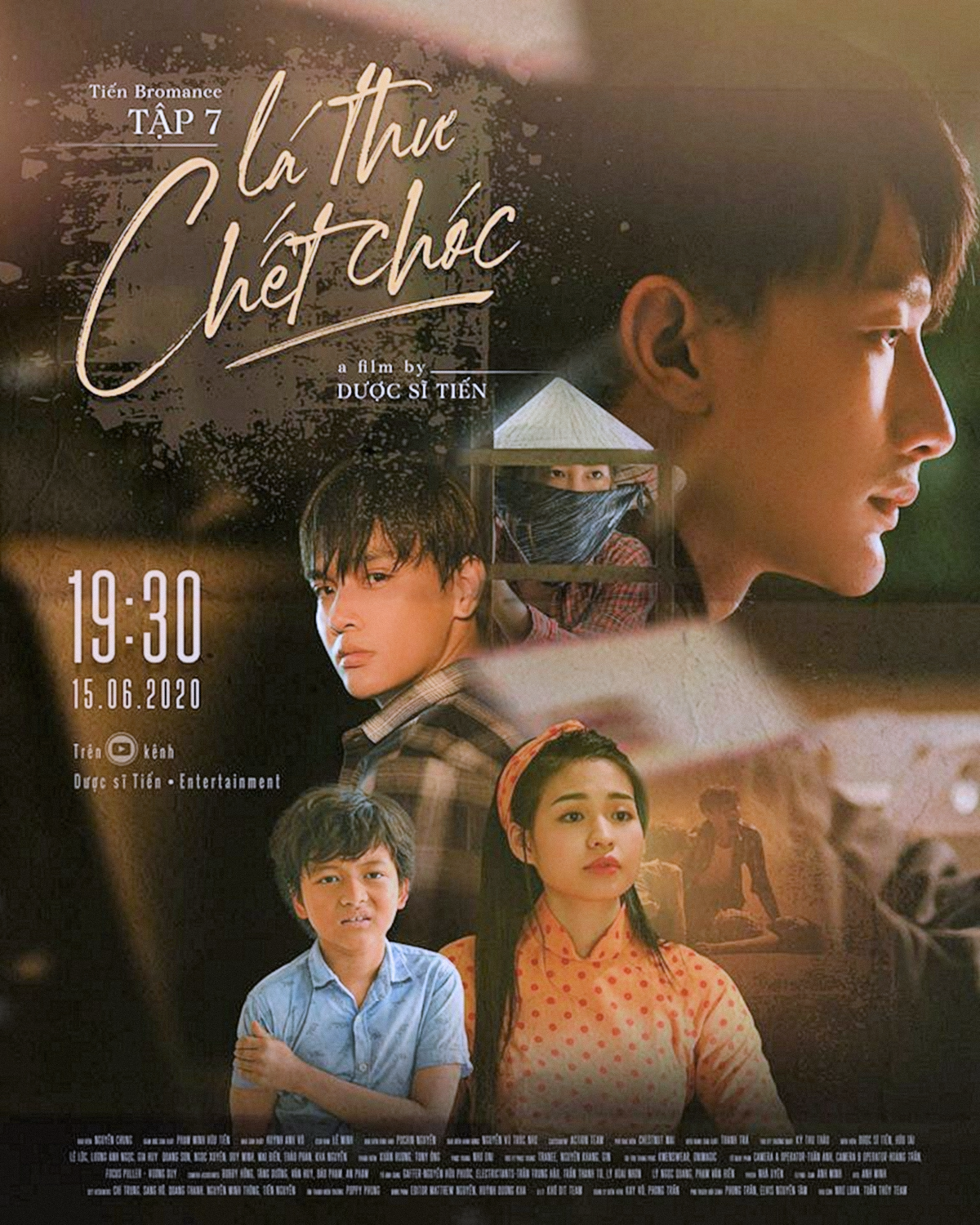 Episode 7 of Tiến Bromance finds our two lovers not lovers anymore, but instead strangers in the same setting. How did they get to this point in their lives? …seeing each other as strangers or versions of themselves that aren’t real at all to each other. Episode 7 doesn’t explain it, so if you’re hoping for an answer to what happened after Hong went over the cliff, I’m sorry you won’t find it here.

An official press release for the future of the show explains Tai ran away from Tiến because of the danger he finds himself in when with him. I mean, can you blame him?

Finally, you do see more of the new characters shown in the theme. Nghia, the always right and all-knowing assistant to Tiến, is played by Quang Son. Do, the boy who cries killer and unwittingly knows more than he thinks he does, is played by Gia Huy. Phuong, the beautiful woman, who constantly stares at Tiến’s perfect jawline as though in love, is played by Ngoc Xugen.
The super annoying but innocent as freshly fallen snow Co Giao is played by Le Loc. Hong, femme fatale, revenge chic, determined to ruin my main’s happiness, is played by Luong Anh Ngoc. All have more to do in this episode that isn’t moving at light-speed and focusing on Tiến and Tai like Episode 6, which is a good thing as this is a new format for the series. Before we begin this review, I want to explain that Hong is alive and well being her usual bad self, she looks entirely different from how she looked in Episode 5.

This episode is beginning where episode 6 left off with Tai accompanying Do on the funeral walk for Do’s father. We see Hong and her cronies join the procession at the same time Tiến and Nghia come to it as well. I scratched my head at what either hoped to accomplish. For Hong, it was probably no good, Tiến honestly I can’t say. Whether it was to catch the real culprit, he is after, or to meet Tai again didn’t matter as Tai left the procession. Something causes Do to turn and see Nghia, who he believes to be his father’s killer, and thus the opening stops making sense. Why did no one try to see what Do was seeing? Hong had that hunter’s knife held high, but no one tried to stop her even though she was in the center of the procession. Instead, they just let her leave with her henchman. What really got me was how Tiến didn’t see Hong; there was a clear line of sight, but he somehow missed the knife-wielding villain? It leads me to believe his love for Tai has grown to an obsession, so he is blind to everything but him.

Be that as it may, the next scene finds Tai at school with Do. Do is there early because he doesn’t want to be at home. After all, it’s boring there. It’s amazing how well Gia Huy plays the scared but trying to be brave Do. His determination at being a policeman is just sweet and heartbreaking to watch. Later in class, Do sees the fairy (fruit seller he gave that name). The teacher’s assistant Co Giao sees no issues with letting a tiny boy whose father just got murdered run off to meet anyone outside her supervision. The fairy reveals herself to be Hong, who wants to see if the boy actually knows who killed the father, which is shown in to be her. Now, this really irked me because a flashback is supposed to be a vision of something that occurred in the past (and in a previous episode), but the scene itself is new. Again Tiến sees Hong but is too preoccupied with seeing Tai alert Nghia, who was with him or anything. Hong quickly leaves, leaving behind her straw hat, but no one notices this.

All told, which brings me to my issue with this episode. In the previous five episodes, the writing for the show was leagues ahead of what is currently being shown. It’s as if all these characters no longer see the flaws in the situations in which they find themselves. Seeing and being suspicious of things that didn’t make sense is what kept Tiến and Tai alive in the original five episodes. Which is great because gone are the human traffickers, malevolent spirits or murderous almost-girlfriends……oh wait, she’s still here. I don’t know if the writers have changed or what, but this is a second season confirmed by a press release calling it the second chapter. So the threat to the main characters now is the same, but she’s moving differently. Which again would be good if it was true to her character.
In the first five episodes, Hong was like a serpent, stalking the men before striking whether it was with nameless baddies or just hypnotism and manipulation. In this 2nd series, she seems to have a larger purpose, and I’m curious as to what it is even if Tiến seems unbothered by her presence.

Tiến, my perfect jawline, Ninja assassin, has only one thing on his mind, Tai. Why? Because 5 years ago Tai ran away from Tiến and for five years, Tiến has searched for him. That passage of time has changed Tiến, who is now employed by a criminal organization. How he came to be there isn’t explained. Phuong is the Boss’ daughter and has taken a liking to Tiến, and appears to him while Tiến is hallucinating about Tai. He is so lost in his love for Tai; he doesn’t even hear her speaking. He instead focuses on an innocent-looking Tai smiling seductively at him. She does exert some power over him by commanding him to dress a certain way later in the episode.

Unable to stay away from Tai, he writes him a letter and leaves it where Tai finds it and reads it. Tai’s reaction to the letter confirms his memories are resurfacing with him experiencing sadness while reading it. A second letter is intercepted by Co Giao, who reads it and see’s Tiến who somehow isn’t sneaky for the first time ever – and the two have words. This scene is hilarious as Co Giao lies about Tai loving her, which makes Tiến brood for a moment before he threatens to kill her if she doesn’t stay away from Tai. Hold the phone, super sweet Tiến flat out threatens to kill our annoyingly sweet teacher. Yep, that would be a blip on your resume. The writing again for this show has changed so much that super sweet Tiến is no longer with us, and in his place is a cold-hearted man obsessed with Tai. I dislike this revamping of the main character. Yes, five years is a long time, and people change, but would Tai love Tiến if he heard about that threat???

It won’t matter much longer as the second letter invites Tai (how did he get it) to look at a beautiful view and somehow Co Giao and Do are alone at the school – at night – with the lights off. The filming of this scene is clever as it plays on what we already know about the Tiến Bromance series. Tai getting attacked has sadly become an overused plot device in this show, and it’s been a while, so when we see sneaky Hong and her cronies moving towards a familiar setting, we assume it’s for Tai. But shock shock, he’s left to cry and think in peace. For once, the would-be killer’s attack Do because they think he knows too much even if he didn’t actually see anything of importance. Co Giao is killed, and Do is allowed to flee, which makes no sense since he had become the actual target, but ok? Again, the writing of this episode is its own worst enemy in this series so far.

Tai arrives at the school for reasons that are never explained and sees Do, the teacher, and tries to carry her to the hospital but cannot. We see Tiến in his car waiting for Tai, who appears, and before we can have our lovers reunite, Tai punches Tiến, and the episode ends

This episode of Tiến Bromance for me was a miss as it did nothing but set the stage for later episodes by telling us a few tidbits of information but further doing nothing at all to explain the numerous plot holes left gaping from Episode 5. It confirmed the short film format of the original five episodes is no longer in effect.
Now it’s a serialized show where each episode follows the next. The writing for it was nowhere near what I had come to expect. The pacing is confusing as they spend too much time on things that didn’t move the story forward and not enough time on the twists changing it. By the end of the show, I wanted to punch Tiến myself for how he has handled himself in this latest trip to Tiến Bromance – threatening to kill that sweet lady for loving Tai. Who does that? Tiến that’s who.