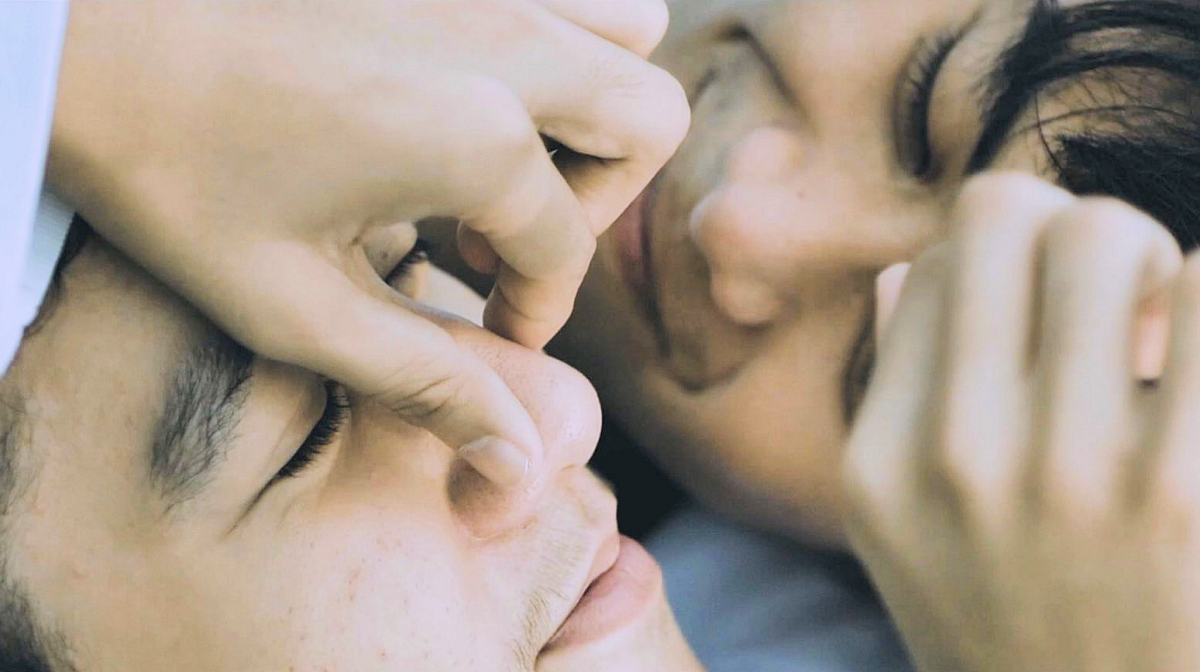 Beginning with the words on how the episode is a tribute to the unique and theatrical American musician Lady Gaga, anyone surprised its a musical needs to enjoy it with headphones. After the opening episode, “Touch – Move” had our main characters Christian and Zach cuddling together for warmth. It’s a surprise to see them now facing off against each other in a musical production about breastfeeding. Why? ‘Cause it’s Sakristan. That’s why!

Beginning with the cast singing along (imagine a scene from Glee) to a rewrite of Lady Gaga’s “Bad Romance” with lyrics about the best parts of breastfeeding. It felt like I was watching a well-done music video. It’s, in fact, the class practicing to perform it live. It all goes well until someone notices a peeping Tom (Zach) recording them. The group of students corner him wanting to know what he was recording.

Zach, to his credit, has no shame and declares he was recording Christian. Christian is embarrassed by this, but his classmates are more concerned with whether Zach is recording their dance routine for the other team. It’s important to note that the mains are not together at this point in the show – however, it seems that’s exactly what the still nameless classmates are stating. Everyone knows Zach likes Christian, and Wolf (Christian’s best friend) is quick to declare they are flirting with each other. He’s the one to let the two men out of the locked room from Episode one. It would have been nice to know who most of these students were by this point, but episode one didn’t introduce them.

The fact that Christian is an acolyte for a church doesn’t seem to matter with this group of friends. They instead focus on the fact the two are basically dating, and before anyone knows what’s happening, Wolf has the phone and is deleting the video. Zach leaves happy he can recover the footage.

Sakristan moves very fast, which isn’t necessarily a bad thing, but I did find myself pausing to get a grasp of everything so far and referenced back to the first episode to check on things. The writing for the show is, at times, inconsistent with the finer details or explaining things. So if you feel lost, it’s OK. I was too.

The moment I say this, you’ll come to the teacher explaining it’s Nutrition Month at their university, and the theme for it is breastfeeding. The competition is to figure out which team will be performing the theme. Yes, I’m ignoring how Pak University got the rights to the Lady Gaga song, or why they thought it was appropriate to take a song about a toxic romance and turn it into a theme about breastfeeding. Penelope, finally named in conversation (she was the obnoxious girl from the start of the episode), is chosen to draw who goes first for the team Christian is on. It’s evident the team Zach is on is made up mostly of extras for the scene by their lack of any script. It’s really hard to identify who actually matters in this show…

The teacher does a comical introduction of the teachers who will be the judges. Of course, she spends most of it, giving herself compliments, and we know her name is Jasse. During a prayer for success that’s insulting to her teammates, Penelope states they have no talents and will hopefully not mess it up for her (team, I’m sure she meant team). But when the performance occurs, it’s her who is out of step, moving totally out of sync with everyone else. I’m assuming it was supposed to be funny and ironic, but the joke fell flat with me. Weird decisions with shaky camera moments and bad angles just made the whole scene a mess to watch. But if you pay attention to full cast moments. You see, Penelope is the worst dancer.

Now that travesty is over, the second team led by Bridgette that has Zach on it perform. It’s clear they are serious by the fact that their actual costumes come complete with amazing eyewear and not just white t-shirts or an open wardrobe call. They perform in perfect sync, their moves calculated, and the camera work on the scene is suspiciously better, making it clear who the director wants you to root for. This is funny because the characters you’ve seen the most are on the losing side. Most of these characters I don’t know…maybe they will be side characters later.

Once Bridgette’s team wins, there is a slow-motion trip, with sad music playing over the dramatic moment of Christian’s team leaving while Zack watches. Sakristan uses music to convey what you’re supposed to feel. Cut to the stereotypically chubby, and feminine gay men group huddled together from the losing team being catty. (Editor’s note:  Holy shit, why is this type of gay men so excessively represented in BL? It really gets OLD.)

They refer to each other as “sis.” It seems that no BL series can exist without the lean character in their group (‘lean man’ was on the winning team). He now appears and is ignored by them. It’s a bit much, but bitter boys are bitter boys. They kick him out of their friend group, and the only one who was nice to him was about to congratulate him when…(of course) an attractive male appears. (The man is Paps from their lollipop-popping ratings of hot men earlier.) Anyway, ‘lean man’ thanks Paps for the glasses he made for the team and flirts with him in front of the last remaining “sis” still standing there. Then this “sis” declares ‘lean man’ is a snake for going after the man “sis” wanted.  (Editor’s note: Seriously? C’mon producers, directors, find another source of comic relief.)

I get it, BL shows want to represent every Gay or Bi or stereotype. But I wish these characters were as least introduced with names at some point. Only one of the “Sisters” has a name, and he was the first to bolt after snatching the ‘lean man’s’ candy and tossing it. It’s hard to feel for characters when I have no idea who they are. And of course, the ousted “Sis” picks up the sucker (that they used to pop their mouths when rating hot dudes) off the ground the “sis” threw it on and eats it (gross).

Finally, we come to Zach sitting waiting for Christian on the stairs. Christian, to his credit, doesn’t ignore Zach and sits beside him. However, he is very annoyed, proving the whole white team is a bunch of sore losers. He starts reviewing Southeast Asian countries with Zach, but Zach hasn’t studied. This makes Christian even more annoyed, and when he starts to leave. Zach performs Christian’s team’s song complete with the dance. Christian eventually smiles, and the two end the episode practicing the dance together, happier.

Ummm OK. After episode one’s well-plotted beginning, Episode 2 fell flat for me. It felt like filler that had no real purpose but to get us to a ‘cute ending’ moment. The two Lady Gaga songs took up way too much time in the episode, as it is the second episode. In most shows, a second episode establishes the format for the show. Here, I didn’t see the point in them being there at all. Was it for gay viewership? Shock value? Breastfeeding is a sensitive subject in general, so dedicating a whole episode of a BL series to it just felt weird.

Outside of the first scene and the last scene and meaningful looks at each other, the two mains did nothing to solidify what we learned about them in episode one. There was no mention of whether Zach will be kicked out of school. None of the plot points were even brought up. So again, I just don’t see the point of this episode. Maybe Episode 3 will make it make sense?