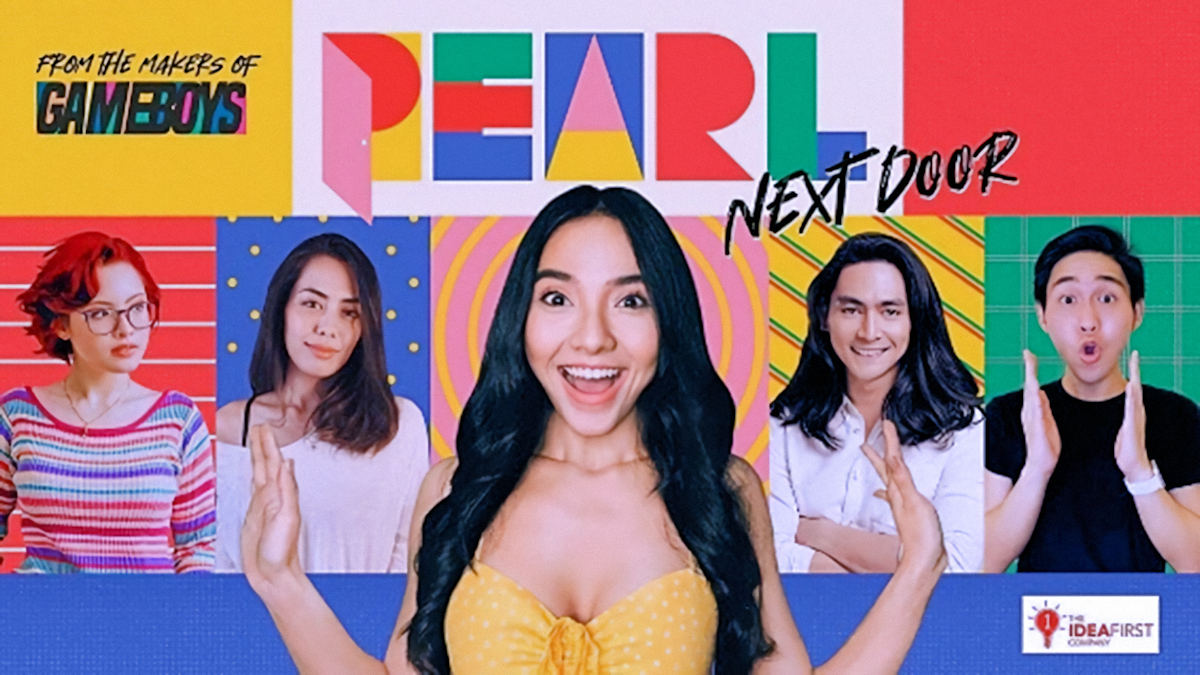 The coffee is fresh and hot, the dessert I should probably pass on waiting to be eaten, and a show I have been highly anticipating since it was first announced paused and ready to play. In an online world saturated with BL romances, it is refreshing when a Girls Love production appears on the scene, especially when the series centers around an energetic, strong, and loveable female lead.

Pearl Next Door is a GL series focused on the beautiful and bubbly Pearl, a character first introduced to viewers in the Pinoy BL Gameboys. Returning as the lead in her solo series, Pearl is in search of her own shot at happiness.

Pearl Gatdula is portrayed by Adriana So, an actress whose online presence is as captivating as her character.

The stunning and honest, Karleen Gregorio is portrayed by Iana Bernardez.

Rachel Coates plays the role of Alex Aguirre, the third protagonist in the love triangle.

As a fan of the Pinoy BL series, Gameboys, I was incredibly excited when I heard that Pearl was getting her own spin-off series. In Gameboys, Pearl was such a remarkable presence, strong female support that dominated every scene in which she appeared. When Pearl was off-screen, she left an emptiness behind. I missed her, which says a lot about the significant impression she made on me as a character. Seeing Pearl get her own series, her own chance at love is satisfying for me. I find it much harder to find good quality GL romances compared to BL. Google “Girls Love,” and the only thing that appears in the search results is a list of topics about why women like romance. As a female bisexual viewer, it’s refreshing to watch a series with a bisexual female lead that I can relate to and root for.

Pearl Next Door opens with a voiceover narration that sets the stage for a Pearl we only got glimpses of in Gameboys but didn’t get the chance to know on a deeper level.

In a montage of Gameboys moments, Gav and Cai bless the screen in flashes of relationship bliss. It makes Pearl feel good to see her friends so happy. She loves being their cheerleader and the person they call on when they quarrel, but she also wishes for the same kind of love in her own life. She wants someone she can watch movies with, someone she can turn to when things aren’t so great.

The camera pulls back, and the viewer realizes Pearl is on a video call with a beautiful woman named Karleen. It is immediately apparent that Pearl and Karleen have been friends for a while.

I want to take a moment to point out that it is not necessary to have seen Gameboys to watch Pearl Next Door. However, if you have seen the BL series, there is the sudden realization that Karleen is the person Pearl vaguely mentions in Gameboys.

Karleen and Pearl talk long into the night, and during their conversation, the expressions and stares the two of them share convey unspoken, longing feelings. The performances by both Adriana So and Iana Bernardez and how this entire sequence is shot emanates an intimacy that connects the viewer immediately with the story.

My heart beat faster, with a smile plastered on my face.
I didn’t want their call to end, but it did.

Pearl films a vlog entitled “The One”  that details exactly the kind of person she’s looking with which to fall in love. I love most about Pearl because of her spirit, optimism, and zest for life. Her face and body language present an open book of feelings she doesn’t even attempt to hide. She’s honest and real.

The vlog is fun and colorful with Pearl’s “real talk” about how she views finding a partner and the expectations she has for the future person in her life.

I laughed because, as much as I’d like to believe looks shouldn’t play a role in the partners we choose, they often do. Not in every case, but in most cases, being attracted to someone is the first step in getting to know them. Some people “attraction at first sight” rather than “love at first sight.” Love is something that comes after knowing someone. However, no matter how appealing a person is, if their personality isn’t attractive, then it’s a pass.

“Beauty is subjective,” Pearl points out.

Everyone has a different type. What I find attractive isn’t going to be what the stranger in front of me at the grocery store finds attractive. I like how Pearl points all of this out and how sure she is about what she’s looking for personally.

Our girl, Pearl, has high standards, which I love because I feel like no one should set the bar low when it comes to the person they plan to spend the rest of their lives with.

“No one is perfect. But there is an imperfect person out there who is meant for you.”

High standards don’t mean perfection. It simply means setting the bar high enough that you don’t settle for someone you know isn’t healthy for you.

I have mad respect for the people behind this show already. Vlogs are like online diaries that, if done right, are supposed to connect with people around the world. By having Pearl film a vlog at the beginning of this series, we are invited into a virtual journal entry that connects viewers, especially those who have not seen Gameboys, with Pearl in a truly realistic way.

At the end of Pearl’s “The One” vlog, the viewers realize that the video serves more than one purpose. In it, she confesses her feelings for Karleen before sending the video to Karleen herself.

The next scene opens with a video chat between Pearl and Fonzy Hermoso, portrayed by Phillip Hernandez. From the get-go, I loved Fonzy. He offers the same friendly, honest support for Pearl that she gave to Gav and Cai in Gameboys. Pearl is distressed. After sending her vlog to Karleen, an awkward stretch of silence develops between the two women. Karleen has not contacted Pearl at all.

“I thought I was being safe,” Pearl tells Fonzy.

“You’re not a condom,” Fonzy replies.

I love their exchange, the way they banter while also working through Pearl’s dilemma. Pearl believes Karleen feels the same way about her that she feels about Karleen, especially since Karleen admitted that Pearl had saved her from the loneliness brought on by quarantine. Therefore, Pearl doesn’t understand why Karleen is giving her the silent treatment.

Fonzy is a voice of reason. Love is often blind. When in love, people can put meanings on meaningless things, giving the gestures and stares between two people more power than they really have. He points out that Pearl may be assuming too much when it comes to Karleen’s feelings.

I seriously adore that Pearl Next Door is presenting burgeoning feelings in such a relatable way. Pearl doesn’t seem the least bit confused about being attracted to Karleen. Her confusion lies more in Karleen’s avoidance. Pearl’s bravery spoke to me, her feelings warming my heart.

The most eye-opening part of Pearl’s heart-to-heart with Fonzy, however, is the last line.

This line and Adriana So’s delivery of it is especially potent. One moment Pearl is smiling; the next, her face falls. At this moment, I realized there is more to Pearl than meets the eye, that there is a touch of confusion mixed with her genuine outward appearance. I got the sense that maybe she isn’t quite sure what it means to be herself, that she isn’t quite as sure of herself as she believes she is.

After a period of avoidance by Karleen, Pearl discovers, in a heart-rending twist, that Karleen doesn’t share the same feelings. I think this is the first time I’ve seen Pearl with such a serious expression, and it hurt. My heart broke.

The most devastating line for me is when Karleen asks, “Are you even gay?”

Karleen has been hurt in the past. It’s obvious in her determined stance and her steadfast resolution not to date anyone straight or bisexual. I need to know her backstory because I have no doubt it’s complicated.

The pain Pearl felt over Karleen’s question, and rejection cut me. I’ve been in that place, brushed off because I wasn’t gay enough or because the person I had feelings for feared losing our friendship.

For me, Pearl’s reaction is gold. I loved that she didn’t run from her feelings and instead admitted that she wasn’t sure she could see Karleen as just a friend. She didn’t throw away how she felt simply because she was afraid.

The episode ends with the introduction of Alex Aguirre, a seemingly old friend who reaches out to Pearl on social media. As soon as Pearl confirms their friendship online, a call comes through.

Alex’s confidence is absolutely charming; her voice completely soul-crushing. She has the kind of voice I am seriously attracted to, and as soon as she spoke, I had goosebumps. I only got a moment with Alex’s character before the first episode ended, but she left a deep impression that will stay with me until the next episode airs.

The pilot episode of Pearl Next Door delivered everything I expected. It built me up, tore me down, and then built me up again. It left me both thinking and guessing. It introduced three female characters that exuded three different but potent characteristics: bravery, honesty, and confidence. For me, this show is already relatable on a personal level. I hope people go into Pearl Next Door with fresh eyes rather than comparing it to the Gameboys series that came before. Pearl deserves a series that marches to the beat of its own drum, a series that emanates a different vibe because it is different. The production values, the acting, and the writing are amazing. At no point was I confused. Pearl Next Door starts off strongly. I highly anticipate the episodes to come.