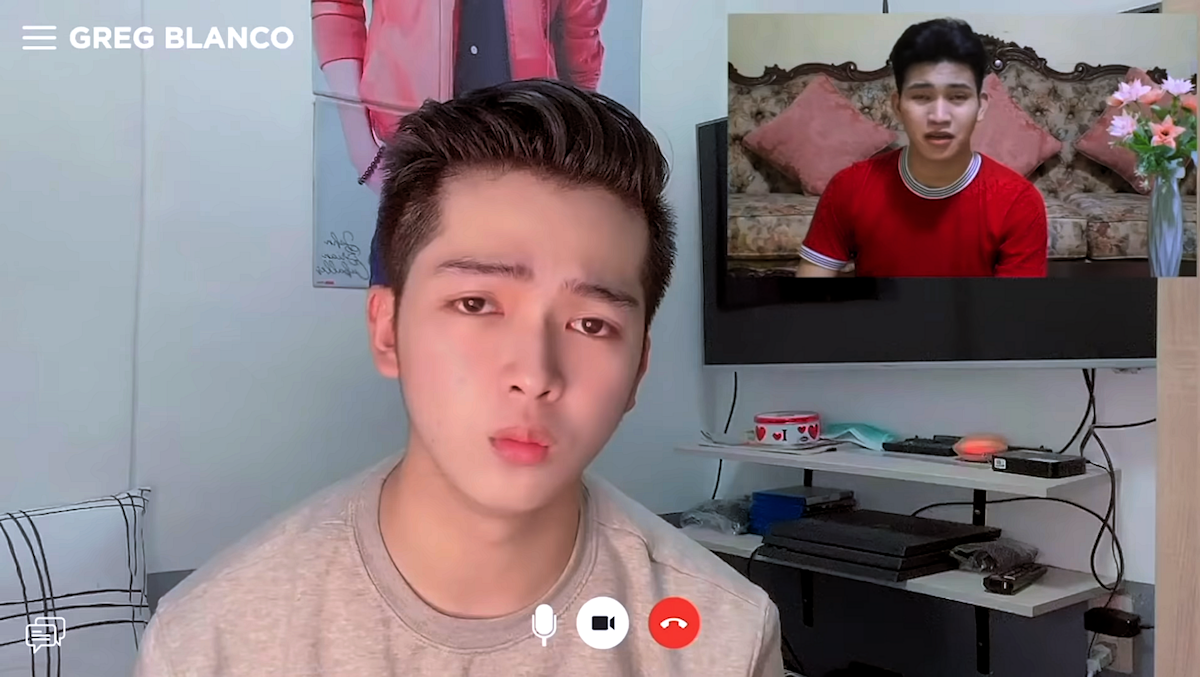 To me, the hardest breakups have always been friendship breakups. Words can’t describe how painful it knows that this person you called friend will never be a part of your life anymore. I’ve cried more over ending relationships with friends than in my intimate relationships, and I think it’s because finding a true friend is difficult. There’s this connection you have with friends that you can’t get from your partner.

I’m saying this because, after six episodes, I finally understand why Axel can’t let go of Greg. If he admits that they’re not meant to be, he’ll be losing his lover and best friend. Someone he’s always confided in, and that I think makes this whole thing complicated. Being betrayed by a lover who’s also a friend is not only heartbreaking but traumatic.

My Thoughts on The Episodes

Episode 4 starts with a video call from Patrick. “Have you told Axel yet?” he says to Greg. Pause, I paused because I knew what Patrick meant by this question. I also paused because James Andrew Razon (Patrick) does a great job portraying an antsy lover waiting for his boyfriend to break up with his other lover. Greg does an outstanding job of pretending to care as he reassures Patrick that he’s the only one for him.

Patrick tells Greg to tell Axel that he doesn’t love him, and Greg becomes confused. “How can I tell him I don’t love him?” In his mind, he doesn’t want to hurt Axel. Greg cannot fathom hurting his friend Axel, with who he is in a relationship with as he talks to his ex-boyfriend, with who he is ALSO in a relationship. Patrick is confused about why he would even date Axel, his best friend, when he isn’t in love or in ‘like’ with him. I think it’s interesting how Patrick has these same emotions and thinking as the audience or commenters in the comment section. Why would you date your best friend when you don’t even like him? Although he is also a cheater, I think they wrote that dialogue to have someone with whom we could “identify.”

Just for a second because Patrick is not as clean-cut as he presents himself. Interestingly, Greg gets pissed because no one understands his side. They both went out looking for something they lacked and came to the realization that they needed each other. Greg loves Patrick no matter what and wants to be with him.

After Greg and Patrick end their conversation, we move on to Greg and Axel. Axel took some advice from my favorite person Tito Ricardo and his friends and tried something new.

This picture is strictly for me. Look at how great Axel looks. Aejhay Espinosa does a great job showing love, longing, and desperation through his eyes. You can see his eagerness to please and be loved by Greg. His skin and the makeup look great (this foundation and lighting fit him), and can we talk about his teeth?! They look fantastic. The lighting in this scene is dim and blue, and it comes off depressing yet hopeful, just like their relationship. Did I mention how great Aejhay looks?

OK, back to Episode 4

Greg is annoyed and standoffish and doesn’t want to play. He looks away, annoyed when Axel asks him to use his imagination. He plays along and puts on his headphones. They are “happily” and dancing with each other “virtually.” While Axel is enjoying himself, you can see a visibly sad Greg. This scene is the first time we see Greg sad or remorseful, maybe? Then we get some flashbacks as they dance.

After a sad and heartfelt dance comes a sincere conversation. Axel starts by saying he never thought this day would come and how he was afraid to ruin their friendship if he brought up being in a relationship. Greg is upset, and I roll my eyes because I know what’s coming, and I hate it. Heartbreak is to follow, but first, a marriage proposal from Axel.

I want to hug Axel because that child has it bad for this boy who doesn’t love him. And I want to talk to Greg because he’s as lost as they come. Episode 4 is proof that they’re both looking for love and looking for acceptance, but I don’t know if they know what that means yet, or maybe they’re confused about their definition of what Love is. What I found interesting is how similar Greg is to Axel. He acts the way Axel does, but with Patrick, which is why I don’t understand how he can treat Axel that way.

Episode 5 was short and sweet for me, but not for Axel. Anyway, here we go.

The episode opens with the previous episode, and then we head over to the friend group (SOTUS!!!), where Carla (I love her makeup) is excited about Renz’s birthday activities! They’re getting ready to play spin the bottle with a twist, and not everyone looks excited.

Let’s play spin the bottle mixed with rock paper scissors meets truth or dare. I love this scene because the friends and Axel seem to be getting along, which is in stark contrast from Episode 2, where they ignored him. I also find it hilarious that Axel is learning all these sexual/curse words (they put asterisks, so I can’t spell the words) for names like sex and penis. He is having so much fun, and I love that.

It’s all fun and games until it’s Axel and Greg’s turn. Axel wins, so of course, he asks Greg, “Do you still love Patrick?” Everything turns awkward, and Greg turns away and doesn’t answer the question, and then the moment we’ve all been waiting for – Axel asks why Greg agreed to be with him.

The scene is intense, and I loved every minute

Then it’s midnight, and they say happy birthday Renz!! Meanwhile, Axel is wondering why Greg hasn’t answered his question. This part is confusing because the camera pans to both Greg and Axel, and I can’t tell if they’re alone or still part of the party?

We know that Greg is apologetic and says yes, he is still in love with Patrick and that Axel is just a close friend.

In the end, Axel is sad and tells Greg how much he hurt him not only as a lover but as a friend and how Greg confided in him about things about his family. Greg lets Axel know that it’s not possible for them, and he tried to love him. In the end, they break up, or that’s what it seems since Axel hung up. Everyone is sad and crying, and I’m like, FINALLY!

This episode was fantastic because they broke up. I was saying “break up” since the episode started. I also realized that Axel is in love with Love. I’m not saying he doesn’t love Greg, but his definition of love is a sweet romance that can’t be tainted by betrayal or deception. However, I think his fear of losing his closest person clouded his judgment. I feel like that’s why he proposed at the end of Episode 4. Greg that child, knows he doesn’t want to be with Axel but doesn’t know how to handle things. He is indecisive even though he knows he doesn’t want to be with Axel, and in the end, he hurts Axel.

The episode opens with a distraught Axel, roaming his room and being depressed. He is reminiscing about the night before.

Axel is so sad, and he doesn’t know what to do with himself. As much as I wanted them to break up, I am sad that Axel is heartbroken.

Sidenote: As someone who had to study the equivalent of that DSM-5 book, I don’t know how he has time to be sad about love. The exam is hard. He needs to be studying.

We spend five-plus minutes of sadness before our new group, “UWMA,” saves the day! Can I just say I love how the writer/director uses BL series names for the group chats? I love it, and I love UWMA, and I love that that is the name for Axel’s friend group.

The friends and Tito Ricardo talk to Axel about Greg. I think this is the first time I’ve seen Axel just listen and not have any input. I liked what Grace said about closure. It’s nice to have closure in a relationship.

How do you define a relationship? Would it still be considered one if you’re just friends?

These are interesting questions and Axel, being with his support group, wonders the same. His friend Lester even asks though he’s not OK, has he ever thought if he wasn’t in a relationship with Greg, would he still be his best friend?

Axel is hurt but grateful for the experience of showing his love and knowing that he’s capable of love.

Axel is sad because they may never be able to return to what they once were. It’s like their eight years of friendship have ended, and all that remains is sadness. Still, he’s grateful for the memories, even if they don’t end up together again. He’s sad and looks lost, and his friends are sad for him.

Patrick calls during the friend meet, and Axel switches over, and the episode ends.

I like this friend group. The way they communicate is beautiful. Even though Axel is their friend, they’re objective and ask questions about his feelings and support him.

These three episodes were an improvement from the first three. I’m glad I stuck around. Things changed, and relationships were tested. I still have an issue with the friend groups because it doesn’t look like they are actually communicating with each other. Also, Episode 4 ended with the proposal, and I’m guessing Greg said no because they never showed otherwise, but why would Axel go to the party if he didn’t say yes?

I still can’t stand Greg. He’s still confused even though he knows what he wants, and it looks like he’s willing to hurt or shut those around him down to get it. Axel, my sweet summer child, I hope you let go of Greg and all the bad things and find yourself. It’s OK to love, and as Tito Ricardo said, “you can’t always be happy,” but this relationship isn’t loving, and it’s best to let it go before you lose your friend or worse, lose yourself. The story is progressing, and I like where it’s going. I want to advocate for a FULL BREAK UP AT THE END! I don’t want them to be together. I feel like even after the diagnosis, I wouldn’t want them to be together. Both of them are beautifully flawed; they’re both looking for something to hold on to, whether it’s love, acceptance, or their identity, but they need to work on themselves. This show is a BL, so there has to be love, so I think they can work on their friendship and care for each other, but I would like them to go their separate ways at the end of the series.