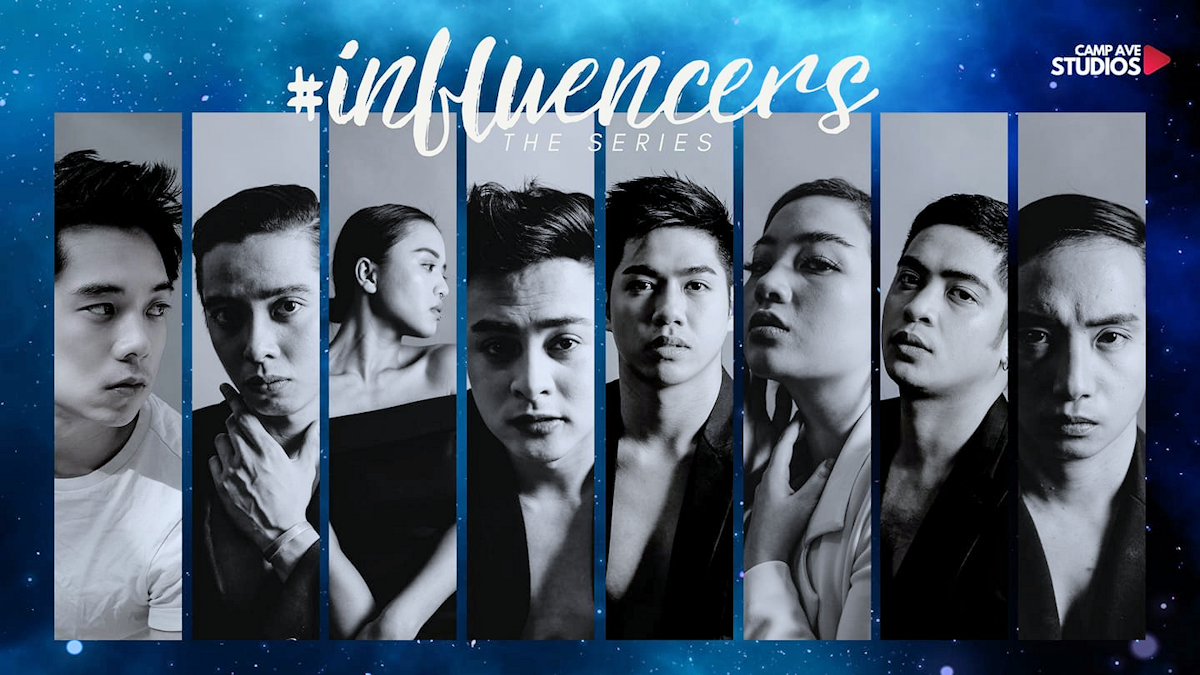 In this chaotic world in which we live, where love seems to be a rare feeling that can’t be held by everyone, what will happen if two lost souls meet each other? Under the starlight, a bond is created through honest conversations about life that slowly bring them closer together. Leaving the past behind them, the two lonely creatures, Ram and Migo, look in the future with the hope that one day their love for each other will no longer be a source of debate in this “cruel” society. Because love is all about kindness, and it can belong to anyone, without exception.

After chasing the sunsets that symbolize a beautiful ending, Camp Avenue Studios is back with its latest creation, #Influencers the Series. Pushing into the growing Pinoy BL world, Renz-Bhil Tugelida, the director of the series, and his sister, Stephanie Quiros, who once again combine their brilliant minds to create and write the stories, aim to bring a different flavor and perspective to the industry. Discussing social issues that occur in our daily lives, such as cancel culture, bottom-shaming, bullying, and even mental health, #Influencers the Series acts as an invitation to create social change. Both Renz and Stephanie hope this series can start dialogues among its viewers that go beyond the kilig moments; because it’s time for us to use our platform and influence in the right manner.

Following the journey of Migo Valle (portrayed by Leon Eustaqio), an Influencer who has an interest in discussing social-political issues, and his ultimate rival Ram Agoncillo (portrayed by Chollo Sotiangco), #Influencers the Series tells a story about young Influencers and their life outside the camera when nobody’s watching. The sudden encounter of these two souls searching for some peace of mind in this universe has turned into a chaotic mess as they start to invade each other’s space. Along with their friends, who also have stories to tell, this group of youngsters is here to debunk the myths of becoming Influencers. Because in the end, they all are just human beings who want to be understood.

Before I begin my review, I would like to congratulate all of the cast and production team for the powerful pilot episode. It might not be the best as it still needs improvement to make it more thoroughly enjoyable; it’s definitely one of the most promising series that currently airs. So, kudos to Camp Avenue Studios for this remarkable achievement; after all, hard work pays off!

Now, let’s start our analysis of this series. First, I love the way Camp Avenue Studios bid farewell to its previous series, Chasing Sunsets, by presenting some details that remind viewers of the series and including how Farrah and Cheche’s figure into the storyline. It’s indeed hard to say goodbye to their first creation, especially one that has touched so many hearts. But life continues, and we should keep on moving forward as well. So, once again, let us say goodbye to Chasing Sunsets and give our warmest welcome to #Influencers the Series.

What I love about this series is definitely the storyline. Stephanie, who now has full creative control of the plot, has once again shown her stellar capabilities as a writer. Discussing social-political issues in a series is challenging. You need to pick the right angle on presenting the storyline and not make it feel like preaching. However, at the same time, you don’t want it to be a shallow effort either. And in my opinion, Stephanie has done a wonderful job finding the balance in presenting the topics by correlating them to our daily life. The issues being tackled in the first episode of #Influencers the Series are real debates that happen in society nowadays. On top of that, those are important topics that we should be discussing as it affects people’s lives to the extent that it could cause loss of life. In that sense, let me share with you my thoughts about those issues.

Two topics are highlighted in this pilot, which are bottom-shaming and ‘cancel culture.’ From stories that I hear from my gay friends, I know that this is a real struggle many people face. The fact that you end up in a sexual role that gives you and your partner the most satisfaction and have that fact stigmatized is sickening. In this day and age, we attempt to move forward in this so-called ‘modern’ world where change and enlightenment should be our best friend. It’s time to change the way we do things and the way we interpret what we see. We should be more open-minded and be more accepting. Anyway, humans are complex beings that can’t be easily put into boxes or categorized. We are more than the roles assigned to us by society because they present artificial boundaries in our development as individuals. Therefore, let’s stop imposing these harnesses to growth and acknowledge everyone as capable of doing great things despite their sexual orientation, perceived roles, race, and other factors. After all, we gain nothing from labeling others because of our own insecurities against infinite diversity.

As for ‘cancel culture,’ this pilot episode acts as a timely reminder for all of us about the negative sides of this crass and unfair methodology where fans actually attempt to control the lives of these “influencers.” Almost every day in our life, we hear that someone is being canceled just because they made a mistake, especially those who have a little fame and some influence. At times, some feel they have the right to control public perceptions of those so-called influencers because they see them as a sort of demigod who isn’t allowed to make any mistakes; they need to be perfect at all times. The fault in that line of bullying is forgetting that their targets are human beings, just like us. They are flawed, and they are allowed to make mistakes.

And most importantly, these victims of whim are allowed to be forgiven. All of us deserve that second chance after a mistake. Moreover, ‘cancel culture’ doesn’t guarantee that they won’t make the same mistake again in future. So, instead of ‘canceling’ them, we should educate them non-punitively. Tell them what their mistake was and give them some advice on improving the public perception of themselves. In my opinion, it’s a better way to help them and others as well. While it is sometimes necessary that they be held accountable for their mistakes, I don’t support ‘cancel culture’ to accomplish “punishment” because no one really has the right to cancel someone else’s life.

Besides a script that has brought context and relevance to the stories, it gives more depth and nuance to the entire episode. I think #Influencers the Series has done a good job on the visual aspects as well. The cinematography is beautiful, and the color grading of the episode is pleasing to the eyes. I can tell that Renz and the team have listened to their viewers’ suggestions regarding the preceding series and improved themselves to give us better visuals. One of my favorite scenes is the opening scene, which is breathtaking. As we enter months of lockdown, seeing the calming scenery of the beach not only fills us with serenity but also the hope that things will eventually get better.

Despite my satisfaction with the plot and cinematography, there are still some technical things that I think can be further improved to make the series a more enjoyable view. For example, the sound effects that usually accompany the action during the comic relief scenes – sometimes they’re annoying as they distract me from the dialog and expressions of the cast. Or the shot of Migo’s first entrance to Camp Avenue, especially when the car approaches the parking space, it feels like a commercial shoot for the car itself. There’s a split second that I’m considering purchasing that car for sure. I understand the ‘dramatic’ effect that the team might want to build as it’s the first time Migo is coming back home, and it’s his grand entrance. However, it didn’t give me that vibe. For me, that scene would be better without the effect.

As for cast members’ performances, considering that this is the first series for most of them, I think they did a good job of portraying their characters. They can still improve the way they deliver their lines to make them flow more naturally, as well as practicing their facial expressions. In some scenes, the expressions feel a bit exaggerated. But overall, each of them has the potential of becoming solid actors and actresses in the future. Congratulations to the entire cast for this great first step!

Overall, I greatly enjoy watching #Influencers the Series. In just one episode, the series has tackled so many social issues that are timely and relevant for the times. It’s also exciting to see viewer reactions as I noticed some discussions start to grow after its YouTube premiere earlier this Saturday. This success means that Camp Avenue Studios has moved ahead in achieving its purposes, which are not only to provide an entertaining series to watch but also to create movement in society. However, this is only the beginning; by engaging in this discussion, we will have a better understanding of the issues, and hopefully, we can do our part to affect desired change for the good.

Quoting from what Cholo Cruz said in the series, “Besides, we will eventually get there.” Be it today, tomorrow, or the day after tomorrow, all we need to do is keep on pushing each and every day. Together we will fight on until we get there. Instead of only taking up space in this world, let’s become the safe space for others.