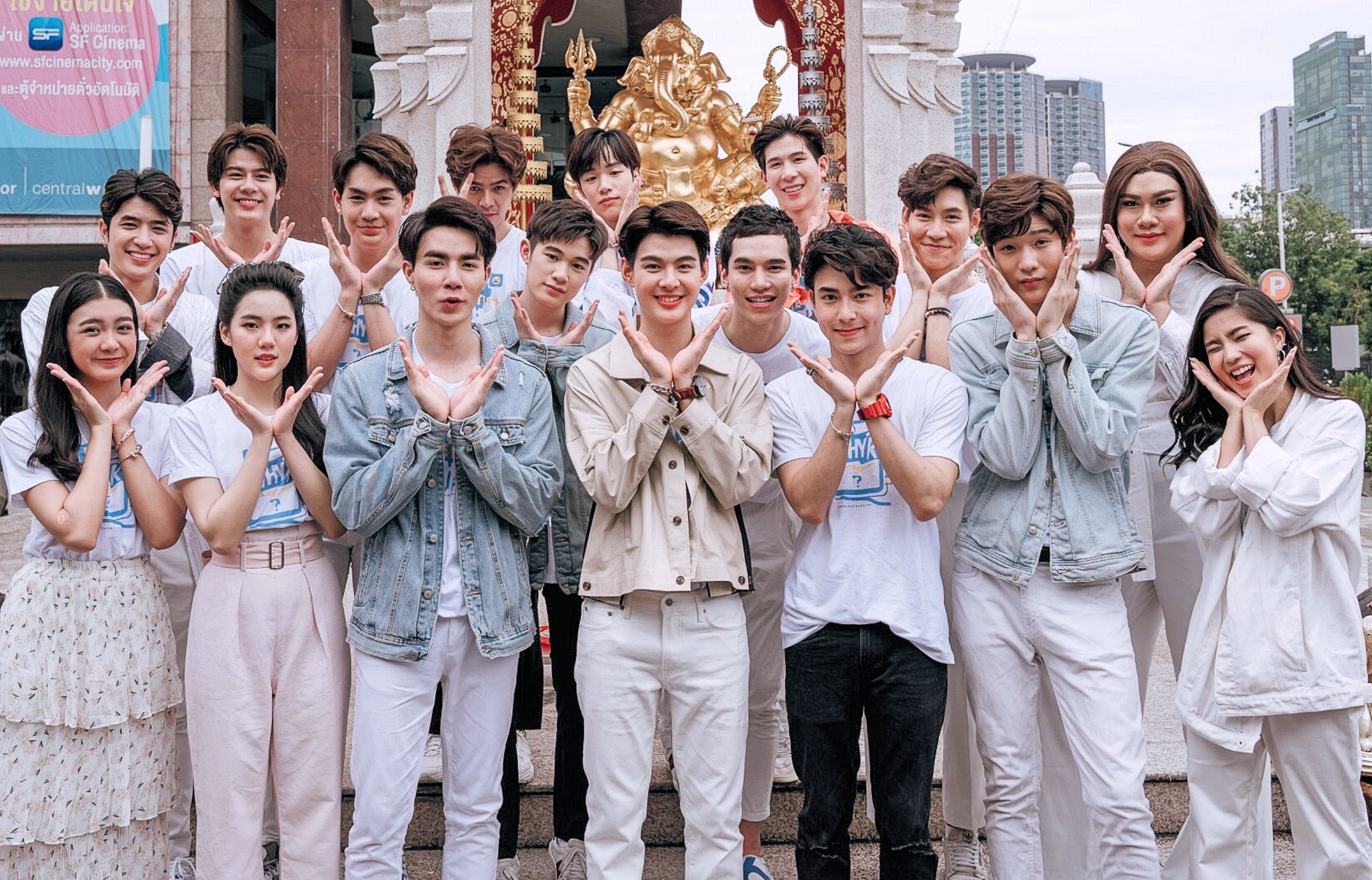 Of Boys & Men | The WhyRU the Series Experience [Opinion]

So WhyRU the Series just dropped us a monumental finale a few days ago. Until now, I am still “moving on” from those kisses that essentially redefined how I will judge BL kisses going forward. To say that it froze me while watching it is a complete understatement; to say that it unnerved me is a complete fallacy; to say that it astonished me is right on target! However, looking back at my personal journey with WhyRU the Series is currently giving me a bittersweet kick in the gut.

To think that I’d never even heard of it by the time it was already being teased on social media, even before casting was complete. I cannot believe how much I have invested of myself into this story. Around the same time, a friend of mine reached out and asked if we could work together on a translation to English of the novel. I got excited about the idea of collaborating with her, even though I had no idea about what the story was all about yet.

Not being Thai much less knowledgeable in the Thai language, I had to rely on my friend to do the translation to English before I could do my own. But then again, the strength in my writing is not the actual translation from Thai to English (there is virtually nothing I can claim my own) but in shaping the English into something which International readers can comprehend better. The only thing we had to do was ask the author’s permission.

Thank goodness for technology, I was able to reach out to CandyOnnn. After consulting with the WhyRU Production Team, we were given the greenlight to do the fan-made translation and the retelling of the WhyRU novels for a worldwide audience. At that time, the novel with the Fighter/Tutor coupling was being rewritten for the screenplay, and the Saifah/Zon novel was just being started. I received the Thai chapters in my email from the author, and forwarded them to my friend who’d do the initial translation to English, and she sent them back to me for proofreading. Then, I would start on my retelling, and by this time, the casting for the show had been completed.

The hype was simmering for the upcoming series; tension and pressure were building within the production group as character workshops started. The chapters were being written, and the series version that merged two novels into one show was beginning to take shape. International translator’s noticed. Very soon, our email inboxes were filled with requests to translate for other languages as well. With the author’s permission, I started the International Translation Group and WhyRU chapters appeared in French, Chinese, Indonesian, German, Russian, Italian, Spanish, and Portuguese and were posted.

Even more languages followed suit. While my friend had to back out for personal reasons, another stepped in, and was quick to accept the challenge. The interest and excitement for WhyRU the Series intensified as soon as the first teaser posters when public. Everything became all too real. Fans the world over freaked out! Yes, BL followers knew of Saint from Love by Chance, but who were these other bits of eye-candy in these posters that looked too good to be true? Not to mention the behind the scenes snapshots that were being posted continuously.

Could these surreal creatures even act? Would this series become one of those productions? One with a great story, delivering on the aesthetics worthy of numerous early peeks, but unfortunately falling victim to to abysmal acting? We’ve seen this happen all too often, then the first teaser for WhyRU dropped, and all hell broke loose. The chemistry from the set was on fire! The characters Tutor (fan favorite Saint Suppapong Udomkaewkanjana) and Fighter (newcomer Zee Pruk Panich) gazed at each other like they’d been in love for years; there was an invisible force of attraction at work there. On the other hand, fans were asking who are Zon (Tommy Sittichok Pueakpoolpol) and Saifah (Jimmy Karn Kritsanaphan in his first role)? They were virtually unknown, so what gave them the audacity to affect the fans so completely from just a few seconds of teaser screen time?

The Production team didn’t stop with just the WhyRU Teaser. Consistently, Producers released HD, poster-worthy images of the series that I would gladly frame on my wall. As the date of the first episode was drawing nearer people were getting antsy with excitement and anticipation. WhyRU the Series was coming.

Episode “0” (The zero episode is usually an introduction of sorts, highlighting the cast and the story) was aired, and fans and skeptics alike went rabid on social media. The translators in the GC (Group Chat of translators) were perplexed. We knew how the story was supposed to go, but the Behind-the-Scenes special gave us clues that we were in for a surprise, and it was the longest seven days ever for Ep 1.

I remember counting down the hours until it finally aired. That’s 1:15 AM in my geographical location, but I was not going to be left out. The last few minutes were unbearable. But then it finally came, and LineTV tweeted the Int’l links right on time. It was more than an hour.

To say the least, I was blown away. The first shot had me looking at the title, making sure that I hadn’t tuned in to a show on Netflix by accident. The aerial shot was completely unexpected; reading the book did not prepare me for it, since it’s not there. The integrated anime made me squeal like a schoolgirl! I didn’t know what to expect anymore. At that point, I knew the novels and the series were going to be a completely different experience. And even knowing the written story would not prepare me for what I was about witness. It unfolded before my eyes, and I was drawn into its slipstream.

Week after week, just past midnight after an anticipation-filled Friday, I pressed play and went into the world that WhyRU made me believe in and convinced me that I wanted to be a part of. I was slapped with cliché upon cliché about the Boys Love genre. Purposely crafted to remind me of BL themes, and tropes from a multitude of popular BL series that have spurred the growth of a genre. A genre that continues to grab massive numbers of new fans with each “Raikantopeni.” It was an experience that was both familiar and intoxicatingly different.

Raikantopeni – more of an inside joke among BL fans that actually translates to “hoping to help to open those eyes.” It’s the first word of the Thai content warning for TV, sorta equivalent to “Viewer discretion advised.” You can even get the T-Shirt and find it on Facebook.

I got to experience a make-believe world that would have been an ideal ‘real life.’ One where love can grow from the weirdest of places, where words can help shape a relationship but ultimately where the only master of your fate is yourself and not fiction. WhyRU the Series was resetting standards. Unfortunately, COVID-19 happened, and while the Production Team should be lauded for doing their best in the two episodes leading to the finale, the audience noticed the change in storyline and the disconnect from the other supporting characters and storylines.

Though for fans who were already hooked like me, it did not matter. The Production Team went above and beyond committing enormous efforts to push for the series towards the finale pulled from the footage they had already shot and ‘in the can.’ While some of the storylines and arcs were left vague and unfulfilled, we were presented the ending, as painful as it would be to say goodbye.

However, I am not saying farewell. I wake up each day to the hope that I get to see more of the angst-ridden love between the men Fighter and Tutor. Equally, I’m excited to know more from the budding of the innocent love between the boys Saifah and Zon. For me, WhyRU the Series was an experience. It was all the BL things dumped into a blender and made into a smoothie – one I’d gladly consume over and over again. It also reaffirmed Saint Suppapong as an actor and made career opportunities for Zee Pruk, Tommy Sittichok, and Jimmy Karn.

Until the next shot of this ensemble cast in the same frame, I salute author CandyOnnn & the screenplay writer, AoftionDMD, as well as the director, ThanaminV. Thank You for giving us this fantasy that radiated with realism if, at the very least, on that last SZ kiss that I can still taste.