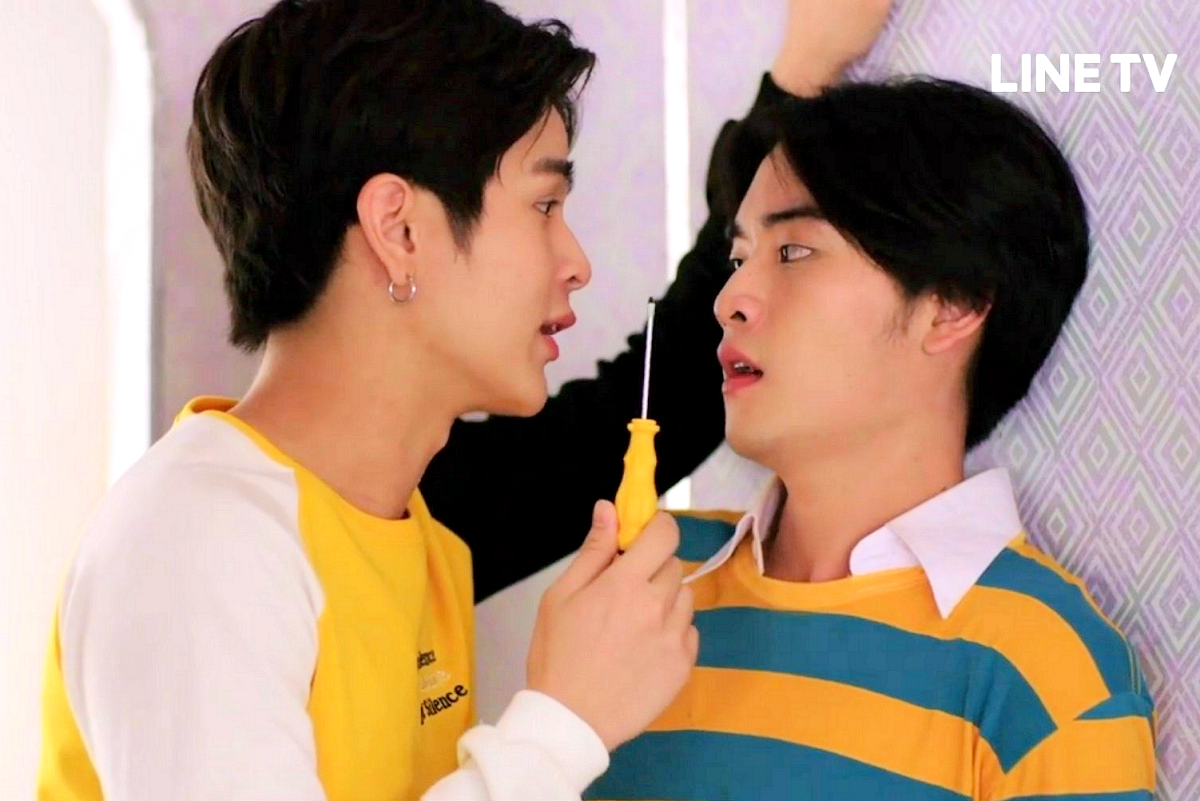 Director Cheewin Thanamin is in his element when doing slapstick comedy. The unpredictable plot, the casting choices, the obviously pronounced special effects, and the overall craziness of YYY Series are entertaining as it is a showcase of pure eye candy. Most notable is DomundiTV talent Poppy Ratchapong who is – arguably – the star of the show. This review is a joint effort with Jen’s BL Views and Reviews!

With reports on the cast by DoHaJun | Edited by TheFNGee

Currently ranked #18 at Psychomilk’s Top 30 Hottest Thai BL Actors, here’s what we have to say about him:

Poppy Ratchapong (รัชพงศ์ อโนมกิติ) exudes that exciting, confident persona that gives him plenty of opportunities to do sexy and comedy (or both). As the scene-stealer in the upcoming YYY BL sitcom, Poppy gets to do it up in drag, as a woman. | read more |

Before I begin with my review, let’s see what the sitcom is all about:

A high-rise apartment houses young boys of different lifestyle and upbringing. Owned and maintained by a crazy and easily-fooled Yaoi fanatic named Porpla (Poppy Ratchapong), the all-male occupants are in various stages of interaction. Porpla’s cross-dressing antics and imagination pushes reality out of the equation and renders the occupants to become more than ‘roommates’ and into something that ranges from ‘bromance’ to boys’ love.

Aside from Poppy, who is a standout from his initial appearance, the main characters – Nott and Pun – portrayed by Yoon Phusanu and Talay Sanguandikul – have been wrecking ‘havoc’ amongst BL fan’s collective emotions with their on-screen chemistry, which gets more intense as the series progresses.

Talay Sanguandikul (ทะเล สงวนดีกุล) – 24 y.o. plays Pun who happens to be one of the building’s most recent occupants. He shares the room with Nott, a long-time cohabitant of the apartment. Talay has taken this season by storm with two high-profile roles. He also plays King in this year’s My Engineer The Series costarring with Perth Nakhun as “Ram”. However, back in 2017, he shot the teaser for “สายลับจับแอ๊บ SaiLubJubAbb” that appeared on Episode 7 called “Sea of Lavender” by GoodfeelingTV. In 2018, he also participated in a short film for the promotion of the famous musical duo NewJiew and even shot a little amateur commercial for Lazada Scholarship in 2015. He has been grinding his way onto the small screen and our hearts for a long time, and it was finally due for him to grab the spotlight.

Yoon Phusanu (ภูษณุ วงศาวณิชชากร) – 26 y.o. plays Nott. He is supposedly an independent bachelor who likes to dabble into electrical gadgets. Back in 2017, he was a member of the fictional boy band “Blue Prince” in the drama “สายลับจับแอ๊บ SaiLubJubAbb” where he shared screen time as a supporting role with James Bhuvadol Vejvongsa. Yoon has been cast to portray a role as
Rit in the upcoming drama My Ride, I Love You originally written by Utain Boonorana.

The three actors are the major players in this BL sitcom and they have made quite an impression. While many international BL fans are not so familiar with Thai slapstick comedy, the acting is first class. Yoon and Talay showcase a kind of on-screen chemistry that grows on you. Both register oh-so-handsomely on the screen, that it screams of the many possibilities of romance and perhaps more. After a perfunctory initial ‘intro’ episode, and the first three screenings, there is so much promise in terms of intimacy and interaction between the two characters.

Supporting characters played by Scott Sattapong (Arm), Peerawich Plynumpol (Om), the Chinese partners, and the lead female character (Apple Lapisara) offer wholesome (yet naughty, and sometimes, over-the-top) entertainment that is – at best – enjoyed without having serious expectations or analytical discourse. After all, this is a comedy and the series reminds viewers not to take them seriously.

This joint review effort with my dear friend and fellow reviewer Jen will be ready for episodic review starting Ep 4.