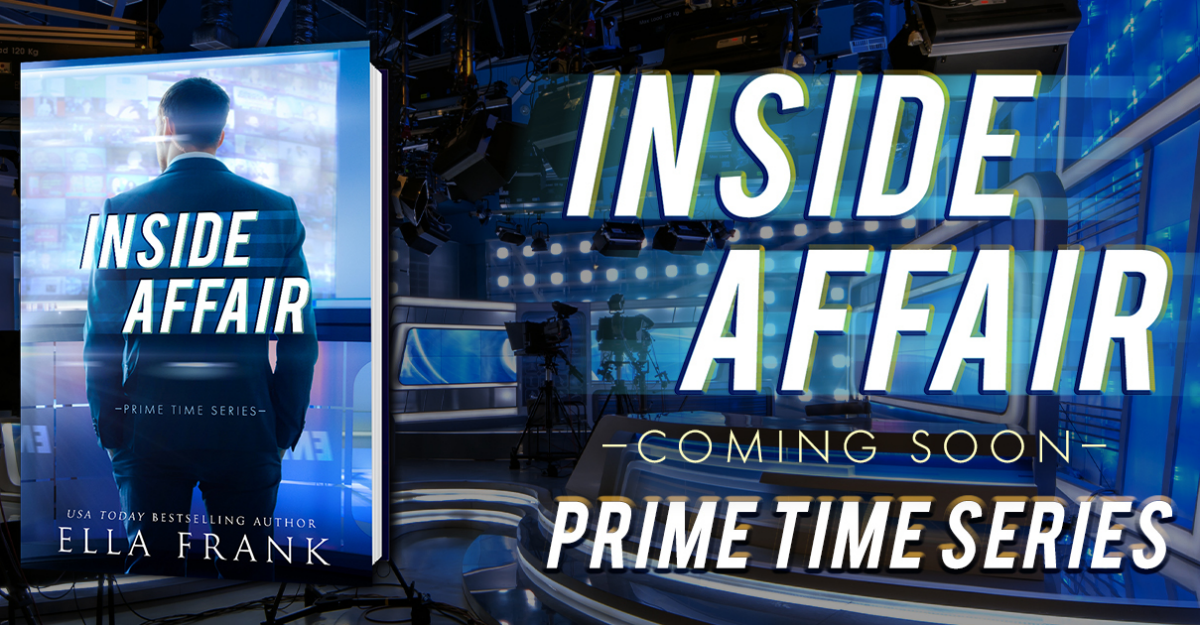 Gay Romance Novels have always been my guilty pleasure. But I’m picky when it comes to the authors, whose books I prefer reading. I wouldn’t just pick any old book off the rack. For me, the storyline has to be intriguing and make me forget the world around me. One such author is Ella Frank; her books are delectable and deliver you right into the middle of an alternate universe with lead characters that slowly become a part of your life. That’s what happened to me when I read the “Temptations” series and fell in love with “Logan & Tate.” Her “Confessions” got me borderline obsessed with the “Priest, Robbie & Julien” love triangle. ” So, I was an excited bundle of nerves when I heard about this new series, “Prime Time.” It was just later that I realized the main leads belong to the same universe, and they indeed rocked my world! Ella Frank’s novels are popular for the sensual chemistry between the lead characters. Although the main characters in this book are still in the process of understanding each other, they have chemistry in spades, which pretty much keeps you hooked. Without further ado, let’s review this book.

If I had to describe Sean Bailey, it would be a surly, temperamental pain in my ass. Never in that equation would I ever include the word boyfriend—and not just because he’s straight.

The older brother of my life-long best friend, Sean, is a detective for the Chicago PD and is also known as Detective “Dick” for being…well, a surly, temperamental pain in everyone’s ass. He also happens to be the best they have, which is why I find myself on his doorstep the night my life is threatened by an anonymous stalker. I only wanted the name of a bodyguard; I didn’t expect for Sean to volunteer for the job. Now, not only do I have a bodyguard, I also have a fake boyfriend.

It must be so hard to be Alexander Thorne, the number one prime-time news anchor in the country, with millions of dollars and a car that costs more than my house. I mean, I’m allowed to give him a hard time about it, but when some creep decides to cross the line and go after him, they’re gonna have to answer to me.

Going undercover has never been an issue in the past, so I don’t see why there’d be a problem now. Xander and I have known each other for years, so this should be a breeze. Except suddenly, my stomach’s flipping when he looks my way, and my body comes alive whenever he brushes by me. I know I’m good at my job and playing a character and all, but this is getting out of hand. I can’t be sure that either of us are playing anymore.

This story is primarily set in the same universe as the “Temptation” and “Confession” series of books, and although a standalone, I would definitely recommend reading both the series mentioned above beforehand. The story starts on an alarming premise where our protagonist Alexander “Xander” Thorne, the prime time News Anchor on ENN channel, is briefed by his boss Marcus about the threatening emails they have been receiving. The letters border on stalkerish, and Marcus orders Xander to hire a bodyguard. Xander having certain reservations instead, seeks help from his best friend’s elder brother, Sean Bailey. Sean works as a Detective for the Chicago PD, and although a prickly character, he is the best on the force. The interesting part about this premise is the love-hate relationship our protagonists share. Sean thinks of Xander as overbearing while Xander isn’t exactly appreciative of Sean’s cocky attitude.

But the tables turn when Xander explains the situation, and Sean decides to take up the role of his bodyguard. Sean makes it clear that he can’t trust anyone else with Xander’s safety, and since he is on extended leave, he would be guarding Xander till the stalker is caught.
The decision is made within minutes, and Sean relocates to Xander’s posh penthouse apartment. Thus begins the cat and mouse chase to apprehend the stalker where they both fake being in a relationship. It is utterly unbelievable because Sean is straight, and Xander is an out & proud gay! Yet the story drives on a tangent when being in close quarters brings them closer, and soon they develop feelings for each other. The stalker goes crazier by the day.

The situation even gets riskier when Xander has to attend an Awards Ceremony. He has been nominated for several awards and cannot avoid the prestigious event, so Xander reluctantly agrees to attend it. However, the stalker accosts him at the event, and the story ends on a cliffhanger as Sean gets seriously injured, trying to fight the Stalker. The next book in the series, “Breaking News” releases on July 27th, 2020 and will follow up on how these two grow closer than ever.

Ella Frank’s novels are always scintillating. She leaves you entirely breathless and striving for more. You cannot pick up a book written by Ella Frank and just put it down until you get done reading it. I’m pretty amazed by the fact that her gay romances share the same wavelength as her straight romance novels are. What’s that? Steamy, hot, and passionate!
Her characters and their stories draw you in and trap you in a world from which you don’t want to escape. From the first time I read her “Exquisite” series to “Temptation” and then “Confession,” she’s never failed to impress me. The journey continues with her new series “Prime Time,” where you have two domineering yet opposite personalities growing closer, despite their differences. You might feel that the concept of “Bodyguard falling in love with his Employer” is quite an old school approach. Yet, the intricacies aren’t.
The best part of Ella Frank’s novel is the characters, which leave a permanent impression on your mind. Like in this novel, Xander is an independent, self-made man. He likes the finer things in life and is proud not just of his sexuality but also his achievements. Sean, on the other hand, might be the best Detective and a force to reckon with, but when it comes to family matters, he always defers back. Both have known each other all their lives, and yet they discover that they have only touched the surface. The book showcases how they rediscover things about each other and grow closer.

I also loved the confidence that Sean displays when he realizes that he has feelings for Xander. While Xander is cautious, Sean doesn’t back down from the challenge of protecting the guy he likes or pursuing him. There is absolutely no confusion on his part about the sudden change in his sexuality. He realizes that he sees Xander in a different light and admits the attraction. While most Ella Frank novels are riddled with steamy hot sex scenes, the trope was a little slower in this book. Frank keeps teasing the readers with promises of intimacy for almost three-quarters of the book, and the anticipation that’s built keeps you high on emotions. The cliffhanger certainly had me on edge, and Ella Frank’s novels always have a promise of HEA. Fingers crossed!

You can download the book from Amazon Kindle as well as Audible.