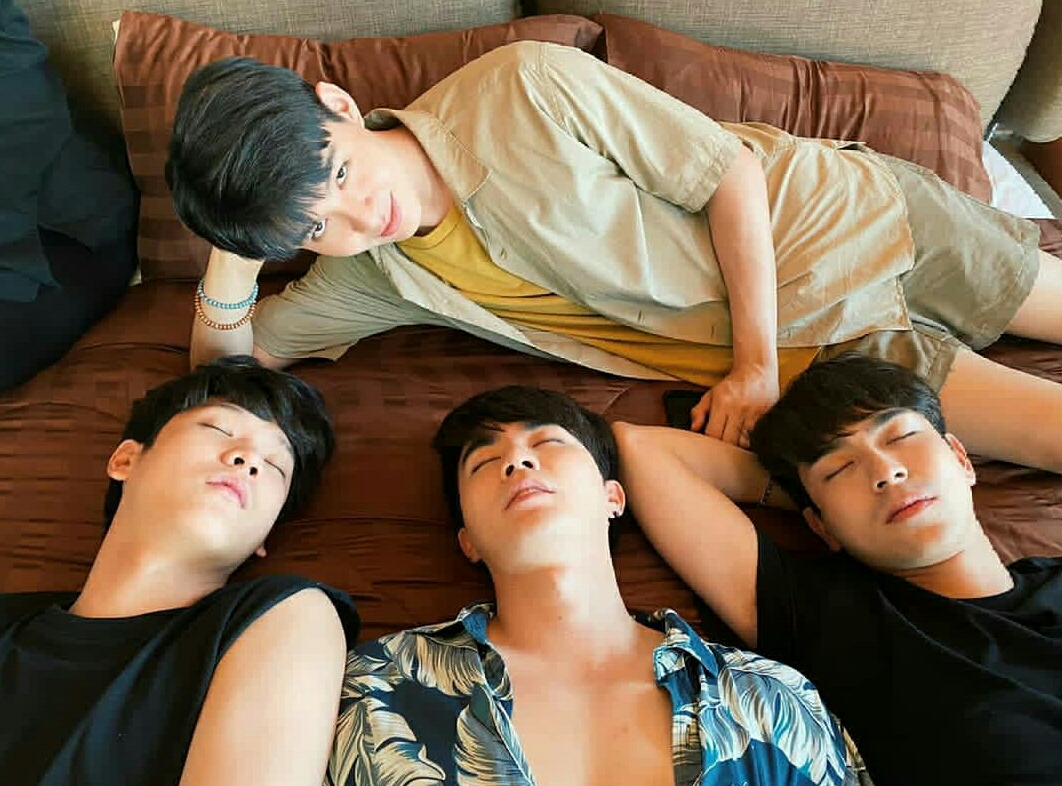 How to review a BL series amidst the noise? In the case of WhyRU, it’s as simple as what you see is what you get. Nowadays, with fan service being the norm – it’s a little bit harder not to join in the fun. But the critical standard remains the same, and what are those criteria?

While these may vary from one show to another, one thing remains – the desire for sheer viewing pleasure! That’s what the show is all about, and actors have been pushed during the promotion to promise that the audience will thoroughly enjoy watching the show!

The drama is about 2 couples – Tutor (Saint Suppapong) + Fighter (Zee Pruk), and Zon (Tommy Sittichok) + Saifah (Jimmy Karn). It begins as a dream sequence where the main characters are shown to be ‘romantically’ linked. The premise is that the dream sequence is an alternate reality. Back in the real world, the four characters aren’t even friends. In fact, Tutor despises Fighter for bullying him, while Zon is suspicious of Saifah’s every move. Certain circumstances force these main protagonists to deal with each other’s hang-ups and by the middle of the series, it’s sweet and sugary. Yet there are ominous storms ahead.

Director’s Vision + Technical Aspects: The Good and the Bad

Dir. Cheewin Thanamin is known for his work in Lovesick S2, Make It Right, and the newly released YYY BL sitcom. He handles his shows in light and cozy way. While he appears to be an expert in light-comedy-romance, there is an obvious disconnect when it comes to the treatment of intense, dramatic scenes. Most of them are done over-the-top – the word cringeworthy comes to mind. In the case of Lovesick, he turns the socially responsible Earn (Ngern) into a wide-eyed puppy with no particular personality. In Make It Right and even in Why RU, he has the tendency to overemphasize sensuality. Bathtub scenes are common (a tradition to tease the audience), with making out becoming the standard for intimacy. While these efforts can be commended, the whole package seems overwrought at times, especially within a weak section in the script – subtlety is not part of his directorial style. We should however, praise Dir. Thanamin as well when it comes to technique in shot selection, varying camera angles effectively. He makes good use of his skills there, so most scenes have movement, and never appear static.

The Acting: An Analysis of Performance

In the first few episodes, Jimmy Karn seems to have been the weakest link, yet as his character grows before our eyes, he ends up with a commendable performance. Zee Pruk sometimes seems too conscious about his acting, and that was bothersome to watch. Yet during intense confrontation and drama, he gave controlled and high-powered performances. Saint Suppapong’s ever-improving acting skills from previous roles cannot be over-emphasized. Yet, Dir. Thanamin fails to push Mr.Suppapong to emote from even deeper within when required, something we know he can do.

Tommy Sittichok offers the best performance in the series – a multi-layered effort that is both dramatic, accompanied by his great set of comic chops. He remains the MVP of the show and should be commended for a job well done.

Suppapong and Pruk’s own improvisation of the love-making scenes elevate the boy+boy intimacy to a new level in the BL world. The word “hot” is insufficient to describe the heat. Not to be totally outdone, Sittichok and Karn’s make-out scene in Ep13 is just as hot, if not more heartfelt (maybe because we didn’t get to see much of them). Indie BL productions in Thailand like WhyRU certainly set the bar higher when it comes to provocative scenes – something that is lacking with “mainstream” GMM-tv.

Critical Analysis: What are the Breakthroughs and What it Lacks

The drama was very promising to begin with, yet the biggest issue is that while the first few episodes were fun and totally entertaining, they are not as impressive when the drama turns to its serious and volatile side.

Mise-en-scène is the stage design and arrangement of actors in scenes for a theatre or film production (in this case, a drama series), both in visual arts through storyboarding, visual theme, and cinematography, and in narrative storytelling through direction.

The camera angle marks the specific location at which the movie camera or video camera is placed to take a shot. A scene may be shot from several camera angles simultaneously. This will give a different experience and sometimes emotion.