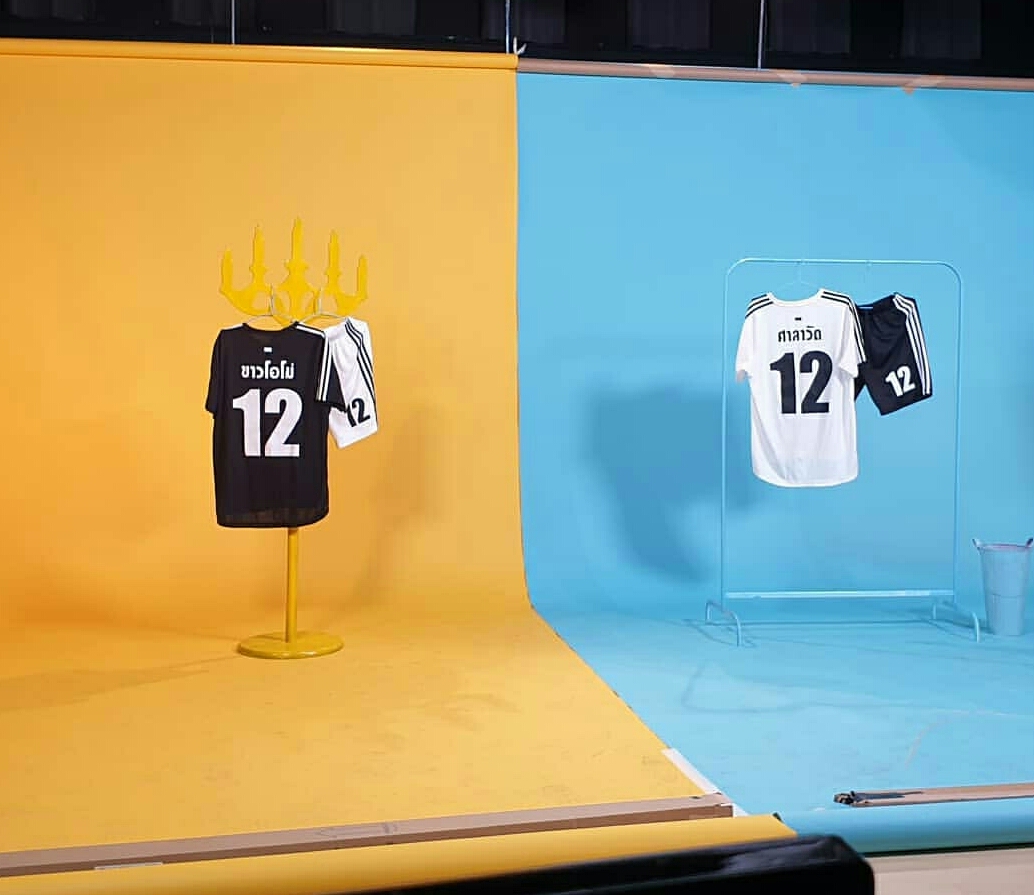 Casting news and buzz are becoming lightning fast, so this is a daily (or even hourly) update on what’s happening – right here, right now!

Zee Pruk as Fighter in WhyRU

It takes a certain level of dedication to dive into a character, especially so if you portray a BL role and you’re straight. I think though, sexual preference should be minimized as a point of reference and assess an actor based on performance. Zee Pruk as Fighter epitomizes the jock.

And the deep friendship that exists between Zee and Saint actually works for the series rather than against it as some wants us to believe.

Discussing the merits of 3 BL shows – 2Gether, WhyRU, and UWMA.

First of all, congratulations that the top 3 are all BL series. It takes a lot of factors for success.

For 2getherseries grabbing #1 is a pleasant surprise and it validates the level of excitement people share for this drama and the cast.

UWMA series gets #2. I think because it is for the emotional rollercoaster ride viewers have had since episode 1.

I’m sure viewers must be curious for the #3 ranking of WHYRU but my initial explanation is how the drama narrative is presented. BL connoisseurs will appreciate its complexity But those new to the BL environment will find themselves a bit alienated with the mentions/tributes of common BL tropes. While the cast – for me – has the most complexity, the UWMA boys has the most demanding, thus the loyalty of viewers.

I think the dramas’ production crews and their confidence are reflected in how the drama presents itself and the kind of journeys the viewers are willing to take.

Fearless prediction? UWMA series will be remembered for the sentimental journey of love through time. While 2gether the series will keep on getting repeat views for the sheer pleasure it offers the viewers. WHYRU the series will encompass the genuine goodwill of the cast and will be acknowledged for the trailblazer that it truly is.

The clarity by which 2Gether the series has been illustrated is just awesome.

#J9 (Joong and Nine) and the 4 other stars of 2Moons Season 3 star in a travelogue show! Promo below:

The cast of EN of Love together in this awesome clip!

An all-inclusive, all-in-one is a combination of all three quorum, with a compilation behind a poster that draws all three pairs into the same image, saying that this work is a mess, and there is more. Go look!!

The short series The Moment: I Need You gets more than a million playviews. Watch it here!

We’ll secure more details as we get the storylines of the said movies.

There’s plenty to celebrate this week, especially if you are a TharnType fan! The production team, led by author Mame just announced the pre-production of Season 2 of the popular series.

According to many sources, Season 1 covers Books 1-2 of 5 volumes, therefore, there are plenty more from the original source. We have yet to find out if Tharn (Mew Suppasit) and Type (Gulf Kanawut) will have primary focus as before or if the new season will highlight other couples.

Fluke Pongsakorn gets ready for My Ride series workshop!

So the cast of My Ride has started to do an acting workshop! Great news since the last update relates to the casting choices. Fluke Pongsakorn looks excited as per the above photo he tweeted!

UWMA’s Boun and Prem in a special video clip!

We made significant updates on Saint Suppapong and Gulf Kanawut profilers to add important events that are currently hounding the Thai BL scene. As some of you may know, Gulf has been receiving plenty of negative feedback as a result of his “personal life” related to his girlfriend. While we don’t like gossip, we are doing an investigation of BL trolls and how some online publication uses intrigues and scandals to generate views. Nothing new here, but we have observed a new level of toxicity and negativity online that target BL actors.

Zee plays Fighter in the said series. He likes Tutor (Saint) but struggles to show his feelings.

In retrospect, I find the scene with the name tagging (during the initiation) very revealing:

The coping mechanisms Fighter employs are many. I think this scene with the name tag is one of those cute moments that will define whatever relationship they will pursue. The chemistry between them is undeniable.

My friend tweeted as much:

The whole conversation is here.

Venue for fan gathering of 2moons2

The 6 actors comprising the 3 couples in 2moons2 arrived in Manila for their fan gathering events. Here is a reminder of the series:

Director Aam Anusorn Soisa ngim has made quite an impression as he spearheads the rise (and further rise) of Thai BL series by directing 2Moons2, a show that rivals the best of BL shows for 2019 and earlier. | read more |

Here is a clip at the airport.

Tommy Sittichok impresses in Episode 1 of WhyRU, the Series. His role requires him to do both comedy and intense drama, and he did not disappoint.

Here’s my review of Episode 1:

Tommy Sittichok is “pressured” to appear first. He is quite photogenic and his previous acting roles made him competent and convincing. From the time the series was announced, Tommy is already a personal bias of mine | read more |

While many may consider the plot of upcoming series 2Gether to be”generic”, I’m focusing on the onscreen chemistry of the main couple – Bright and Win.

I’m personally biased in favor of Bright Vachirawit. I think he is one passionate and dedicated GMMtv actor who has the talent. His costar Win Metawin looks promising as well.

Above clip shows some sweet, romantic moments between Tommy and Jimmy – playing Zon and Saifah in WhyRU the series.

While not as popular as Saint-Zee (who plays the other main couple), they are expected to bring in their own unique take on love between boys and this clip shows what they are capable of.

Below is the equally romantic clip featuring Saint and Zee!

More about this drama from our comprehensive WhyRU the series page!

The cast of In Your Mind, the Series

Natasit Uareksit – WhyRU series. He plays Blue, a supporting role and is the youngest actor in the cast. He is only 17. IG: natasitt

First movie Present Perfect special event – Here we go again! We created the event called “Back to where we begin” a small meet and great but good for your heart.
So the LOVE relationship of ”Oat” and ”Toey” have been returning on the sequel ”PRESENT STILL PERFECT”. We take this opportunity to bring you guys to rewatch ”PRESENT PERFECT” in the cinema with Q&A session from the cast and movie director and you will be the first group of people to see the final trailer and music video of ”PRESENT STILL PERFECT” also watch 15 minutes first of ”PRESENT STILL PERFECT” before the movie will hit the cinemas on March 20,2020

The special episode of WhyRU is both available on LINEtv and Youtube. On YT, there are 4 clips. Part 1 has some issues with the subs but the other parts are fine.

Cheewin Thanamin, the director, tries to explain the series through his observations and the set of activities aimed to train his actors. He basically has to train all of them since they are new. With Saint and Tommy exception no one else has done series or full-length film for that matter.

Game On, the Series

So Yacht Surat has a new drama. Game On, the Series appears to have multiple couples. Here are two more posters!

No details yet even from their official Facebook page– just some posters to generate buzz.

The best twin – AJ and JJ

AJ Chayapol and JJ Chayakorn have been on my radar for months. AJ made a lot of BL fans fuming mad by his rendition of a disturbed third wheeler in Dark Blue Kiss.

Here’s hoping we get to see both in a BL drama soon!

Are you ready for The Shipper? First Kanaphan who is a GMMtv contract artist has done some high-profile drama of recent seasons.

But this is his first BL role – excluding that cute lip balm commercial!

The latest poster of EN of Love confirms the absence of Boun Noppanut and Bon Phongsakorn from the said series. I have not read any news whether both actors are to play parts on a different project nor the reason for the casting changes.

Zon-Saifah team of Jimmy Karn and Tommy Sittichok competes for screentime with Saint and Zee.

Yet the special episode of WhyRU indicates the fair division of the love teams. I like the “cool and collected” attitude of Jimmy Karn during his interview!

Chimon shares this photo on Instagram showing Ohm Pawat sleeping! The boys have been costars many times at GMMtv, including He’s Coming to Me and Blacklist.

Cooper Patpasit and Poy Kritsanapong star in My Engineer, the Series which recently launched its OST.

Model-actor Cooper Patpasit figures prominently in MyBromance series with his acting. While the series itself was problematic, it launches his acting career.

His costar Poy in My Engineer will be their first time as BL couple.

This is episode 0 which means the actual drama is still next week.

So, 2Gether the Series from GMthe Mtv is getting buzz that the top Thai network is not promoting the series well enough. Though, I’ve seen plenty of interviewsinterfaceinterfans complain about subs.And here we have Bright Vachirawit’s profile!

According to dir. Aam Anusorn, there are plenty of shitty, messed up contracts for Thai BL actors and some enterprising agents and talent managers.

No, the contract mostly the agent always right. But don't blame the actors, the contracts very tricky. Some actors never know how much exactly he got. Like he can get B100k per job but the agent took B80k baht and tell the actor the client pay B20k then they sharing money again.

We have an interview with him coming up! [You may wanna read our first interview]

The outspoken director has a new BL documentary that will feature an inside look at the blossoming Thai BL scene.

Fluke Pongsakorn plays Mork in the upcoming My Ride the Series.

In a follow-follow up interview, dir. Nam was reported to have asked all auditioning actors a certain query:

Dir. Nam was reported to ask the actors’opinionsn of LGBT. What exactly was the question?

The question was “What do you think about BL Series?”.

As there are lots of actors and actresses joining the audition, having to perform in this genre of Series might go against their true identities. As a result, we want to be confident that they will be open-minded and able to express the characters well by disregarding the gender.