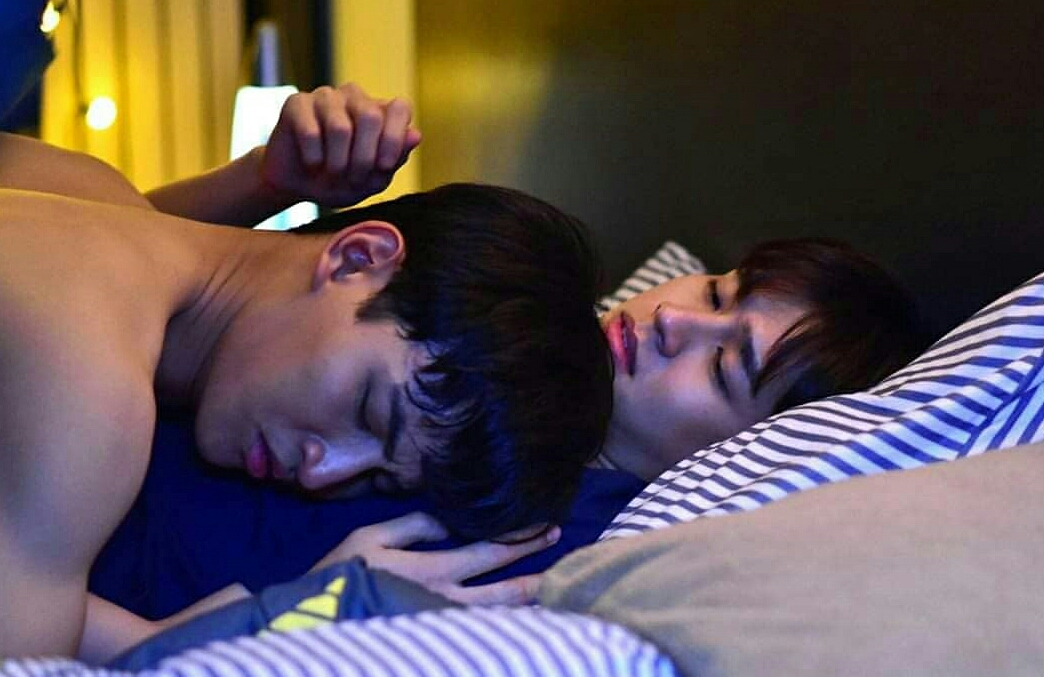 Based on the BL novel entitled The Red Thread by LazySheep, Until We Meet Again [UWMA] The Series is about the romantic relationship between Dean and Parm. There is also the topic of reincarnation.

Update: Reports confirm that the series will run until March 2020 with 7-8 more episodes. There will be a total of 17-18 episodes, including live streaming for the final installment. Note also that no official announcement has been posted yet.

Thai dailies and online publications are putting the spotlight on local sweets. Actual preparation of cakes, pastries, and delicacies are becoming the rage.

The soundtrack by Boy Sompob is in a league of its own. Sentimental, sweet, romantic and dramatic. It encapsulates the essence of the series!

Directed by New Siwaj Sawatmaneekul, this new series follows his directorial debut Make it Right in 2016 and the controversial Love by Chance (2018). New is also directing Fhalanrak: The Series ‏and EN of Love, set for 2020.

Trailer reaction: The red thread offers something new to fans of BL. Since it has something to do with rebirth and/reincarnation, let me get some references on it.

The Red Thread of Fate also referred to as the Red Thread of Marriage, and other variants, is an East Asian belief originating from Chinese legend. According to this myth, the gods tie an invisible red cord around the Finger of those that are destined to meet one another in a certain situation as they are “their true love”.

The trailer is emotional yet totally satisfying. I never like the actors playing the parents, but on this drama, they appear to be relatable and credible. No overacting so far. Of course, the cast is one of the most convincing.

So two couples will bring to life a never ending love. Further explanation on the red thread follows:

The two people connected by the red thread are destined lovers, regardless of place, time, or circumstances. This magical cord may stretch or tangle, but never break. This myth is similar to the Western concept of soulmate or a destined partner.

What an interesting way to show lovers’ connection!

Here are the actors singing the OST of the series!

Let me give you a series’ highlight so that we all have some fresh and clear perspective:

All of the above information were narrated by Gia, who is also translating the books into English.

UMWA explores the issues of soulmates and reincarnation, thus there are two actors playing the same role (and not necessarily the same names) who are either from the past or the present timeline.

The cast of Until We Meet Again, photos (above) courtesy of the series’ official Twitter.

Fluke Natouch Siripongthon (lead in My Bromance, the Movie) is Pharm, who is the reincarnation of Intouch. Playing In in the past is Earth Katsamonnat Namwirote (Love by Chance).

Ohm Thitiwat plays Dean, who is the reincarnation of Korn, and Korn is played by Nine Nopparat, who is also Dean’s past persona.

The spectacular looking Ohm Thitiwat appears ‘ordinary’ at first, but then he was chosen as the lead, so his charm keeps on growing, and what a beautiful boy he truly is!

Both Ohm and Nine are newly cast actors. Bosston Suphadach is the other male cast who plays Pruk.

Boun Noppanut (who is also part of EN of Love series) plays another supporting role here. He’s Win. I can’t help it, Boun just rocks! I can’t wait to see him in the live-action series of both En of Love and UMWA!

We’ll be posting updates and photos as soon as we get news!